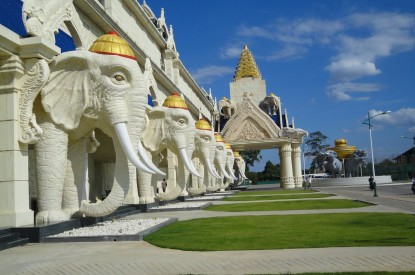 The Lao government has granted a 99-year exclusive bidding for the project, which is expected to start construction in July this year. By 2020, the Lao government plans to develop about 45 areas throughout the country as special economic zones. Many areas have already been promoted overseas to draw foreign investors. “Located in a special economic zone in Savannakhet province, this project will be one of the largest developments in Laos in terms of investment,” said Mr. Chai Jin.

Laos has realised that if it wants to attract more lucrative long-haul tourists it has to adopt projects such as Asean Paradize Savan City, which is located in the Savannakhet special economic zone, just cross the Mekong River from Thailand’s Mukdahan province. The $10bn project features accommodations and entertainment facilities including the aforementioned casino. The full first phase is scheduled to open in 2019.

According to the country’s Ministry of Information, Culture and Tourism, some 3,779,490 foreign tourists arrived in Laos last year, over and above a government target of 3.4 million. So high were 2013’s arrivals that they even exceeded the forecast for 2015. Since 84 per cent of those visitors were short haul travellers from neighbouring countries, staying one to three nights, the yield ($513.5m), however, hasn’t matched the quantity.

In 2012, one million Thais spent one night in Laos and spent a reported average of $20 each per day, with the overwhelming majority Thai visitors crossing the border to patronise casinos overlooking the Mekong River. According to local reports these visitors show little or no interest in Savannakhet’s 116 cultural, historical and natural tourism sites.

The ministry’s marketing director general; Saly Phimphinith said short haul regional tourists spent $238.3m in 2013, while just 470,000 international visitors in the same period spent $275.1m. The figures breakdown into $585 per long-haul visitor and $64 per short haul visitor. Furthermore, those long haul visitors are spreading the wealth beyond the confines of the casino by exploring the country.

Experts predict that tourist arrivals to Laos will reach 10 million by 2020. Only five years ago, forecasts were for three million visitors for that year. By 2019, some 40 hotels, including properties by Ramada, InterContinental, Crown Plaza, Sofitel and Marriott will open. Mercure, Ibis and Best Western are already operating in Vientiane along with about 300 other hotels and other forms of lodging.

Mr. Chai Jin believes the investment in Savannakhet is part of the group’s expansion in order to prepare for the Asean Economic Community in 2015. The group runs various businesses and development projects in Malaysia. The project in Laos is its second development project overseas after a resort in Indonesia. It also proposes to develop retail and trading projects in Thailand.

Regionally, the group has already established a funding unit and set up offices in Indonesia, Hong Kong, Macau and Laos. It will soon open an office in Bangkok. All these offices will cross-search for investors, targeting the Middle East, Japan, China, Singapore, as well as Malaysia.

Asean Paradize Savan City is located across the second Friendship Bridge between Savannakhet province in Laos and Mukdahan province in Thailand, along Mekong River, over a total area of 1,700 square miles, divided into four separate zones.

Zone A and D will be completed within the next three to five years with investment of no less than $3bn. Zone A will comprise a commercial area, offshore financial centre, retail, entertainment complex, duty free, and hotels. Zone D will have an international school, residences, and hospital. All these facilities are set up to serve foreigners. The rest of zone B and C are designed as an industrial area and logistics hub respectively.