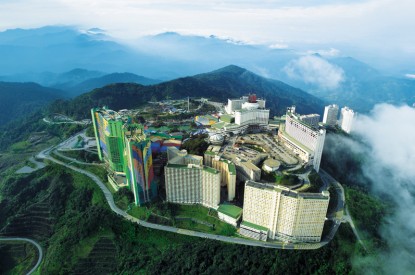 Genting Malaysia has said that whilst its RM10bn (€2.2bn) tourism plan for its highlands resort in Malaysia won’t see an expansion in terms of the space used for its gaming floor, it could involve additional gaming spaces.

The Genting Integrated Tourism Plan (GITP) is a 10-year blue print, launched in December 2013, to redevelop Resorts World Genting
Chairman and Chief Executive Tan Sri Lim Kok Thay. “We would start to ‘soft open’ part of it at the end of this year, and progressively roll everything out next year. There will be a new gaming venue but no expansion. If you can fit more tables into the same space, why not?”

Pre-opening activities continue to ramp up as the Group prepares for the opening of the various GITP attractions and facilities in stages, commencing before the end of the year.

The capital investment under Phase 1 of the GITP will increase from RM4bn to RM8.11bn. Under this phase, the first-ever world class branded Twentieth Century Fox World theme park will see a substantial increase in investment with more spectacular, thrilling and state-of-the-art rides than previously announced. Total investment in the Twentieth Century Fox World theme park is expected to exceed RM2bn.

With the engagement of some of the best talent in the Hollywood movie-industry to help in the design of the park, this is targeted to become a unique and compelling world-class theme park. Meanwhile the indoor theme park will undergo a major transformation turning into a unique themed entertainment attraction offering a total of 18 rides from the existing nine, providing a new and enjoyable entertainment for both young and old alike.

Another attraction is the Sky Avenue which is poised to become the latest lifestyle mall at the Resort. With its unique position as a shopping destination situated 6,000 feet above sea level, it will complement the Group’s plan to achieve its vision of attracting 30 million visitors to the Resort by year 2020.

Genting Malaysia Berhad (58019-U) Sky Avenue will transcend the sense of being a mere shopping destination, into the realm of a unique lifestyle experience. This vibrant shopping and dining landmark covers a gross floor area of close to a million square feet. One of the attractive features of the mall is that it is designed with open air decks that form a perfect platform for cafes and al fresco dining. With a stunning view of the Twentieth Century Fox World and an array of restaurants, its immense dining piazza offers a relaxed and inviting ambiance that’s just perfect for al fresco dining with family and friends.

These additions will serve to create a shopping and dining experience that will distinguish RWG from other resorts in the region. Further complementing the Group’s expansion plans is the Genting Premium Outlets which will be operated at the mid-hill under the Genting umbrella. Supporting infrastructure and facilities will be enhanced and expanded to facilitate increase in visitation and to ease accessibility to RWG. This includes an additional 8,000 car park bays, bringing the total parking bays to about 18,000.

The new high-speed cable car system will be able to carry up to twice the passenger capacity of the current system from the mid-hill to the hilltop. The expansion plans also include a substantial increase in staff accommodation to cater for an additional 7,000 new job opportunities at the Resort as well as new power sub-stations and water treatment plants to cater for future growth demands.
Phase 2 of the development which is estimated to cost over RM2bn will see the construction of additional luxury hotels at RWG, as well as an enviable new world-class show arena with a seating capacity of up to 10,000.

These developments to be undertaken over the next few years, will progress in tandem with the dynamic economic environment and market demands. The Group is cognizant of the constant need to keep on adapting to the changes in consumer preferences and remains committed to further enhancing service and quality of guest experiences at RWG. Meanwhile, the construction and development works for GITP are progressing well. Its first offering – the new 1,300-room First World Hotel Tower 3 – has been fully operational since June 2015. Other GITP attractions and facilities are expected to be opened in stages from the second half of 2016. Once completed, the Group anticipates that the GITP would elevate RWG’s position as a major tourism attraction and the destination of choice in the region.

The Group’s revenue in 2Q 2016 was RM2,234.6m, an increase of 13 per cent compared with RM1,983.2m in 2Q 2015. The higher revenue was mainly attributable to: 1. higher revenue from the casino business in United Kingdom by RM208.8m, mainly contributed by its premium players business as a result of revised marketing strategies adopted. It also reported higher revenue from the leisure and hospitality business in Malaysia by RM55.7m, mainly contributed by an improved hold percentage, which is in line with expectation, for the mid to premium segment of the business even though business volumes were lower.