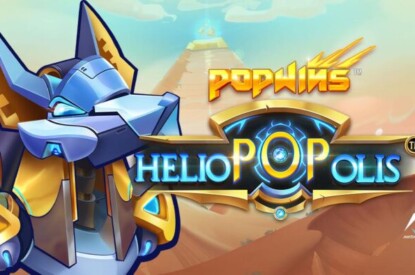 Slots studio AvatarUX invites players to an alternative universe where the Egyptian empire remains eternal in the scientific wonders of HelioPOPolis.

The thrilling title uses the studio’s popular PopWins™ mechanic, which sees the symbols of any winning combination ‘pop’ and two more replace it, increasing reel height and expanding the paylines available up to 32,768.

Modern versions of symbols such as Ankhs, rings and Egyptian gods, fill the reels, with three or more Pyramid Bonus symbols required to launch the Free Spins.

During this mode, players are faced with a pre-bonus reward option of either synced reels or guaranteed wilds. The synced reels will see two reels spin in tandem, while the chance of winning a 2×2 or 3×3 symbol is increased.

During the bonus round, any random symbol can become the Expanded Win Symbol, which covers an entire reel for the chance of an even bigger win. There is also the possibility for Mystery Symbols to land, which can resolve into one of any symbol for huge win potential.

During the free spins, a multiplier increases by 1x after every consecutive win. If a reel is unlocked to its full height, then a 2x multiplier is added.

In certain jurisdictions, players can progress directly to the bonus via the Buy Bonus Feature.

HelioPOPolis is the latest release by the award-winning studio, with its portfolio of content significantly expanding over the course of 2022.

The game is initially available exclusively to AvatarUX’s partners with direct integrations and will be rolled out globally in March 2023.

Nicola Longmuir, CEO at AvatarUX, said: “HelioPOPolis™ brings a new take on the classic Egyptian theme as we give it a modern twist, accompanied by our fantastic PopWins™ mechanic.

“It is another release that sees us explore exciting features and mechanics such as synced reels, expanding Wild symbols, Mystery symbols and much more. HelioPOPolis also comes with our proprietary PopWins™ mechanic which has really allowed us to elevate our offering into something that is hugely respected across the gaming industry today.”