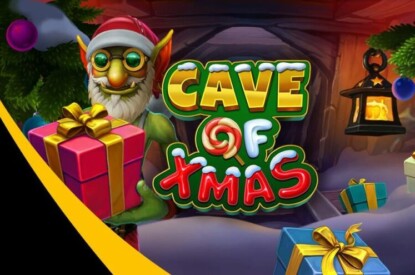 BF Games is bringing the hardworking Goblin back for another adventure, this time with season’s greetings in Cave of Xmas.

While Santa Claus makes his plans for Christmas, the Goblin is busy planning how to strike gold and if his calculations are correct, it all lies just beneath a massive hill of snow.

BF Games’ all new Buy Feature makes an appearance for the first time, allowing players to purchase free spins, rather than waiting for them to trigger. Players can enjoy 10, 15 or 20 free spins for 50x, 90x or 130x the base bet respectively.

To aid his quest in this 5×3 slot, the Goblin is equipped with Nitro, with any single, double or triple symbol added to the Nitro Counter directly above the reel it appears on. Once the counter has three symbols, the Persistent Wild feature is activated, transforming the reel and offering additional win potential.

If players trigger the Persistent Wild mode on all five reels at once, they get a Full House, which ends the feature, resets the counter to zero and gifts them a 200x multiplier.

Scatter symbols take the form of a Treasure Chest and can appear one at a time on any of the reels. Landing three, four or five scatters triggers 15, 20 or 25 free spins, respectively.

Any Nitro symbols that land on the reels during free spins are counted on the meter and when it reaches 15, players get the Grand Reward of 500x. The explode feature could also be triggered at any time, blasting wild symbols everywhere.

The game is the third title in BF Games’ popular Goblin series, with additional games to be added in the future.

Piotr Saluda, Product Owner at BF Games, said: “We couldn’t be happier to bring the Goblin back for another adventure and especially to explore how he celebrates the holiday season.

“We know players are going to love the festive theme as well as our brand-new Buy Feature, and that the title will appeal strongly to fans of the original games, Cave of Gold and Cave of Fortune, as well as newcomers to the series.”