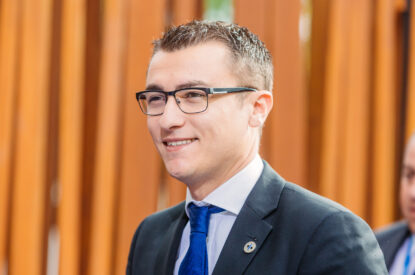 The Malta Gaming Authority announces its plans for Distributed Ledger Technology, Blockchain and Crytocurrencies in an exclusive G3 interview with the Hon. Silvio Schembri of the Maltese Parliament at the ICE show in London.

Speaking to the Hon. Silvio Schembri, Parliamentary Secretary within the office of the Prime Minister of Malta at the ICE show in London, he confirmed that in the second quarter of 2018 the Malta Gaming Authority (MGA) will launch its new regulatory regime, which will focus on minimising unnecessary bureaucracy.

Hon. Schembri confirmed that where today the licensing authority operates a multi-licensing process, this will change to a two licence system, simply a B2C and a B2B licence. “This will remove bureaucracy for the licensees, while ensuring the provision of a more robust licensing and regulatory regime,” stated Hon. Schembri. “At the same time we are also very active in new areas, including crypto-currency and Distributed Ledger Technology (DLT).”

The announcements mirror the proposals set forth by the MGA in a 2017 White Paper that sought to strengthen Malta’s regulatory framework, and which detailed widespread changes to remote/online regulation in Malta. The changes included:

“Last year the Malta Gaming Authority issued an expression on interest for those operators who would like to operate cryptocurrency projects in relation to gaming in a sand-box environment,” continued Hon. Schembri. “I look forward to the fruition of this project, with over 30 operators currently interested in the proposal. This move will underline the fact that Malta is the number one gaming jurisdiction, not just in Europe but around the world. This move into DLT and crypto-currency will provide us with the right resources to accomplish this goal.”

“Having a strong gaming industry, a strong regulatory industry and finance structure, means that we are pushing Malta towards a true digital economy,” he said. “In the coming days we will be in a position to launch new legislation, including the Virtual Currency Act and a new regulatory regime for DLT technology. This is a world’s first and we are being proactive in this regard to enlarge our eco-system in the digital economy. Gaming is a big part of this eco-system, but there will also be ancillary benefits for economy, such as finance, as the lines between traditional and digital finance are disappearing. I believe that Malta is perfectly positioned to be leaders in this industry.”

Blockchain Technology including Distributed Ledger Technology (DLT) and Cryptocurrencies
The MGA is seeking to establish a sandboxed environment for crypto currency usage within the Online Gaming Sector whilst also enacting principles for the application of DLT and its various adaptations within the industry. Conscious of the fact that a certain degree of expertise lies within the industry, with a number of innovative projects and concepts already available on the market, in 2017 the Authority engaged interested parties willing to share information regarding their cryptocurrencies and/or DLT projects.

According to Hon. Schembri, this is a game-changer for the whole digital economy. The introduction of Distributed Ledger Technology, often referred to as Blockchain, has stirred a lot of interest and enthusiasm across the financial industry. DLT is believed to have the potential to substantially change the way financial markets operate today, promising important cost savings and efficiency gains. DLT solves a host of regulatory issues and the willingness of the MGA to engage in this technology gives legitimacy to customers looking to engage in this process. At a time in which many regulators are accused of stifling innovation, the MGA is encouraging serious operators who want to be regulated to do so in a progressive and robust environment.

“The best way to offer security and protection to players is to regulate DLT to maintain market integrity and stability in the future,” stated Hon. Schembri. At present, virtual currencies are not regulated, which presents a real associated risk. Our view is that to mitigate those risks you should regulate in a responsible and robust manner.”

Distributed ledger technology introduces a form of collective bookkeeping via the internet. More specifically, the blockchain is a fully decentralised record of ownership which is shared across a network of computers linked through specific software. This shared public ledger contains records of all transactions in the crypto-currency (or indeed potentially any other asset) that have ever been processed by the blockchain. This in turn implicitly allows verification at any moment in time of who owns how much of it.

Every system that currently relies on trusted central authorities for the transfer and recording of asset ownership could theoretically be replaced by decentralised systems such as distributed ledgers, although the extent to which this will actually happen will depend on many factors.

Given that already today most securities exist solely as digital records in the books of banks and infrastructures, the extension of distributed ledger technology to financial markets seems a logical next step. As the current processing and settlement of financial transactions relies heavily on intermediaries and central infrastructures to oversee and control the transfer and recording of ownership in securities the decentralised nature of the blockchain potentially promises important efficiency gains in the post-trade processing of transactions.

Distributed ledger technology could substantially reduce the time needed for a transaction to settle, in particular in markets that still involve a high degree of manual processing such as syndicated loan markets for instance, and is expected to lead to significantly lower transaction and collateralisation costs. Overall, potential yearly cost reductions achievable via distributed ledger technology over the next few years have been estimated at up to $20 billion.

“It is always a difficult position to seek to lead the industry into new uncharted territory, but we believe that through our robust procedures we have all the ingredients in place to move forward with DLT integration and establish a true service-orientated digital economy that will be truly world-leading,” stated Hon. Schembri.