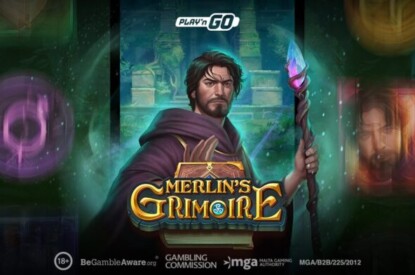 The latest addition to Play’n GO’s popular Arthurian Legend series sees a young and inexperienced Merlin seek out the Grimoire: an ancient book of spells that not only holds the secrets to the art of magic, but Merlin’s destiny too.

The game focuses on the Symbol Splitting feature which is similar to other games in the Book of Dead style games fans will be pleased to hear. Starting off covering just three reels in the base game players have the potential to expand this over all five reels during the Free Spins upping the potential to 7776 ways to win.

It’s evident that the designers behind this game have dedicated their attention to every detail from the background to the symbols to the animations for a game that truly conjures magic on the reels.

This title slots beautifully with the narrative of Play’n GO’s 2021 release Lord Merlin and the Lady of the Lake and shows him in an apprentice light which parallels Merlin and the Ice Queen Morgana (2021) where apprentice becomes mentor.

Head of Games at Play’n GO, Charlotte Miliziano said: “Players and operators love the Arthurian Legend titles that we develop because even in one series there are so many tastes accommodated. ‘Fans of Merlin now have four titles to choose from and for the hopeless romantics there’s 15 Crystal Roses: A Tale of Love, for the lovers of lore The Green Knight. I could go on.”