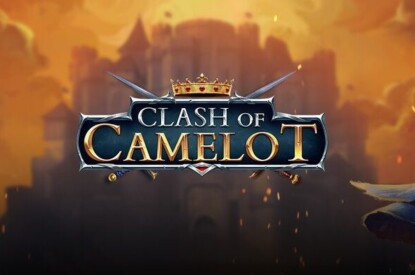 Players will join King Arthur in a quest to wrestle his rightful throne back from the malicious Mordred, who leapt at the opportunity to steal it while the King was searching for the Diamonds of the Realm in the series’ previous chapter.

In Clash of Camelot, players will follow King Arthur into battle and accumulate Win Multipliers up to x100, leading to a sword-fight showdown with Mordred with Camelot’s court at stake.

Packed with features, Clash of Camelot caters to new and experienced players alike, especially those who like making choices in their gameplay. In the Free Spins for instance, players will decide which way to fight by choosing their Win Multiplier and the number of Free Spins to play with.

Both main characters serve as Wilds and can morph into Expanded Wilds when landed on specific reels. Players will collect these Wilds leading up to the Clash of Camelot when King Arthur and Mordred engage in an epic sword fight on the reels.

During the Clash of Camelot, Sticky Wilds will appear. These Sticky Wilds are the players’ key to ensuring Arthur’s victory and returning him to his rightful throne by defeating Mordred for once and all.

Building off previous titles in the popular Arthurian Legends series, Play’n GO’s team of game designers has created an immersive gaming experience in Clash of Camelot, down to the crisp graphics and slick animations that bring the story to life.

With this release, Clash of Camelot joins other successful Arthurian Legends titles like The Sword and the Grail, The Green Knight, and Diamonds of the Realm and 15 Crystal Roses: A Tale of Love.

Head of Games at Play’n GO, Charlotte Miliziano said: “Our fans have come to love our Arthurian Legends series, which only further fuels our fire in taking the adventure to the next level. And with Clash of Camelot, we did just that. “From the compelling narrative that furthers the storyline of this series to the immersive gameplay our designers created, we’re proud to put Clash of Camelot out for the players who can’t get enough of these characters.”