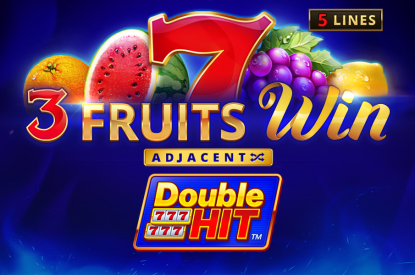 Following on from the launch of Stars and Fruits: Double Hit, the supplier’s latest game is the second to deploy its new mechanic, ‘Double Hit’, that allows players to spin across two game fields simultaneously.

Gold Star scatter symbols guarantee a payout in 3 Fruits Win: Double Hit when at least three appear on the reels, with a pay table positioned to the left of the grid displaying the cash value and groupings of 10 Stars delivering the biggest wins.

The addition of a new grid doubles the chances of collecting those Stars, with each of the identical 3×5 game fields holding five lines, while paying out separately for adjacent symbols in either direction in a unique twist exclusively enjoyed with the provider’s games.

Vsevolod Lapin, Head of Product at Playson, said: “Initially created for players based in Germany, our groundbreaking new ‘Double Hit’ concept is an exhilarating addition to our portfolio for gamers across the globe.

“We look forward to incorporating the mechanic in future game releases, and have no doubt that 3 Fruits Win: Double Hit will prove popular in a wide range of international markets.”