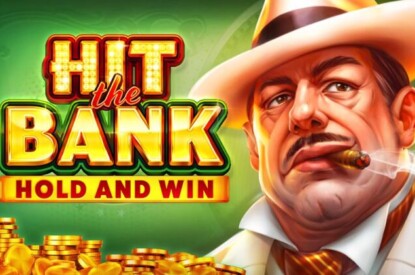 Playson, the fast-growing digital entertainment supplier, has released Hit the Bank: Hold and Win, a classic gangster-themed slot with a modern twist to its gameplay.

This 5×4, 40-line game transports players back to 1930s Chicago when the Mafia ruled the roost. Paying homage to the mobster scene, four charismatic gangsters are the top paying symbols on this slot, and the Golden Safe symbol acts as the Wild.

Three, four or five Bank symbols triggers the Bonus Game powered by the popular Hold and Win mechanic. Players receive a set number of coins depending on the number of Bank symbols they previously landed, with the aim of sliding as many of them into the sacks below to gain big prizes.

The coins reveal a value from one to 10 and all Coin symbols slide one cell down with each spin until it hits the bottom. There are unlimited re-spins, meaning the game continues until no coins are left.

On the top row, Bonus Game boosters are revealed that multiply or increase the value of each Coin on the corresponding reel. Values range from one to 100 and Multipliers go from x2 to x50.

This slot’s maximum win totals x20,000 bets and the game is highly volatile due to the Bonus Game boosters. In certain markets, players can buy direct access to the Bonus Game, allowing them to jump straight into the height of the action for 100 bets.

Hit the Bank: Hold and Win demonstrates Playson’s versatility in its content offering, delivering slots that are traditional but bringing them in line with the most modern titles in the iGaming industry.

Nikolay Illiustrov, Head of Games at Playson, said: “Hit the Bank: Hold and Win is a great addition to our portfolio and we are really excited to be able to bring this slot to our players.

“The Bonus Game is the main draw of this title, exhibiting a complex yet thrilling way to boost winnings. The high volatility nature of this game will be attractive to players and the distinctive artwork is truly eye-catching.”