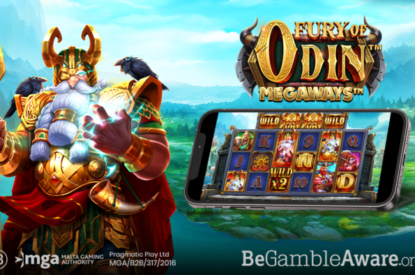 Pragmatic Play, a leading content provider to the iGaming industry, invites players into thrilling battle, where they can witness the wrath of the Norse gods in Fury of Odin Megaways.

Played across six reels, the brand new Megaways title takes on a playful yet authentic aesthetic, featuring changing reel sizes and up to 117,649 ways to win.

Symbols in the game depict various prominent figures from Norse mythology, including Odin, Thor, and Freya, which must form matching combinations to award wins that trigger a tumble feature.

Win potential is increased by wilds which substitute for all symbols except the scatters, making it easier for players to strike it lucky and trigger the bonus round. The Fury icon grants a reel full of wilds to all positions below it, while Mystery symbols can also reveal matching symbols.

Four or more scatters are required to enter the free spins round, with each win awarding an increasing 1x multiplier. The bonus round is also home to the Fury and Mystery symbol features from the base game, which are key to unlocking the title’s huge max win worth 15,000x!

Irina Cornides, Chief Operating Officer at Pragmatic Play, said: “We excel in creating feature-packed titles that allow players to experience Norse-inspired adventures and Fury of Odin Megaways™ brings yet another thrilling journey into this popular mythology via intuitive gameplay

“The game has the ability deliver huge wins worth up to 15,000x, along with a bonus round feature that can be retriggered over and over again, providing an instant draw for players.”

Pragmatic Play currently produces up to seven new slot titles a month, while also delivering Live Casino and Bingo games as part of its multi-product portfolio, available through one single API.