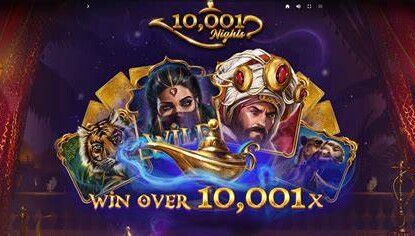 Red Tiger has launched a new Arabian themed online slot called 10,001 Nights Megaways, which with a decadent display of ornate genie lamps transports players into the world of Scheherazade.

Taking a timeless tale and adapting it for the slot screen, players will enjoy elements such as the Feature Lamps. Landing Oil Lamps anywhere on the reels fills the Feature Lamps with magic oil. If a Feature Lamp is filled completely, a feature gets unlocked! A total of nine Oil Lamps will unlock the Mega Wild feature – a symbol that covers an entire reel. Up to four of these Mega Wilds can appear on the middle four reels and can come with a Multiplier of between 2x and 7x that is applied to all ways in which the Wild participates.

With a high volatility, the game hides a secret – Destiny Spins bonus rounds. Fortune may smile on players during this round, leading to untold riches where any win that occurs will increase the global win multiplier by up to 20x and applies to all win ways.

With a maximum potential of 117,649 Megaways to win players have even more chances to challenge their destiny.

James Jones, Head of Business Development at Evolution said: “Players are going to be transported back to Old Arabia with this brand new 10,001 Nights Megaways game. The graphics are stunning and the team have truly created a decadent atmosphere that’s going to hook players right from the word go. Genie lamps, jewels, rich colors and the Sultan himself all contribute to the sights and sounds of the thrilling tale of Scheherazade.”