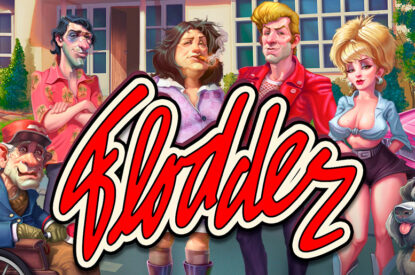 Red Tiger, the online slot company owned by Evolution, has launched a new slot game, based on the 1986 hit movie, Flodder.

All the crazy adventures and fun of the Flodder family have joined the slot world – and players now have the chance to join this crazy ride!

With recurring characters such as Ma Flodder, Johnnie Flodder, Daughter Kees, Grandpa Flodder, and Whisky appearing as high-paying symbols, this game features an exciting Free Spins picker. Players will be able to pick from 20 bottles to reveal the tasty prizes within, including juicy Wilds and saucy Multipliers.

These prizes lead to big wins in the Free Spins Bonus rounds and can range from Multipliers to the family Wilds. Players will want to keep an eye on their screens, as Grandpa Flodder has a habit of rolling across the reels, waving his stick in the air, and dropping between 2 and 12 Wilds as he goes.

Popular throughout the Netherlands, where the characters and general family antics are instantly recognisable, this slot tribute is the first slot game ever created which is based on a Dutch movie and will appeal to both current fans as well as those brand-new to the Flodder experience. It’s time for a new misadventure, so spin now and experience all that Flodder has to offer.

James Jones, Head of Business Development at Evolution said: “It’s been an amazing ride, working with the Flodder brand. This new slot game celebrates all the eccentricities these characters represent, and the team has created a graphically hypnotic game that brings all these outrageous personalities to life in a brand-new way. We hope that the long-standing fans of the movie are going to love this new representation, and that it will find its way into the hearts of a whole new generation. When the Flodders roll into town, you know you’re in for some enjoyable antics – and players are not going to want to miss it.”

Dick Maas, Director, Producer, Owner of the Flodder brand said: “I am proud to be at the source of the first slot game based on a Dutch film. Red Tiger and Evolution did a fantastic job of incorporating the action, humour and energy from the Flodder movies and TV series into the game. It has become a game with recognizable characters, great visuals and stunning animations, which all Flodder fans will enjoy very much.”