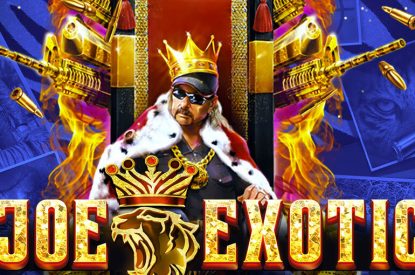 Red Tiger has gone live with a new Joe Exotic slot with the colourful TV character being recreated on the reels in an action-packed production that brings together big cats, big personalities and country music.

The slot’s gameplay features are complemented by a soundtrack provided by the man himself. The five-reel, four row slot has a medium volatility with an Exotic Spin that hands players nine free spins when they land on the first,third and fifth reels. At the start of Free Spins, the centre reel transforms into a full reel Joe Exotic WILD symbol with an increasing multiplier.

There are also Tiger Bounty symbols that trigger a game of chance when they land on the same reels. In this game, Joe presents up to four offers to fellow star Allen Glover, who randomly decides whether to accept a 5x, 15x, 25x or 50x stake.

In addition, the game boasts an Election Time feature, in which the characters run for President and reward players with different cashpay-outs when they collect three votes, and a Dynamite feature, which replaces all low-paying symbols with high-paying ones.

Red Tiger is set to unleash a sequence of slots featuring the infamous zoooperator and his big cat cohorts, who have starred in a series ofhigh-profile films and television shows of late.