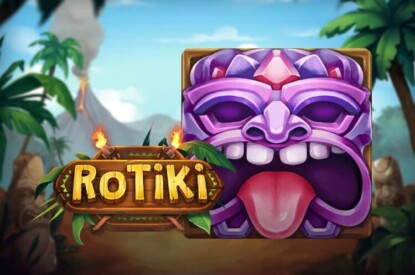 Rotiki has joined Play’n GO’s portfolio as the latest tiki-inspired title in their roster.

It’s the 1700s and the leader of an infamous tribe was known for his fortune, and he was not willing to part with it, even in death. 200 years later rumours of his burial chamber swirl amongst the locals. With the help of a little ancient magic, players must navigate the vast rainforests and locate his ancient burial place.

Rotiki is a beautiful game that puts a new spin on what you would expect to see from a grid slot. Rather than cascading, the symbols move from left to right with each ‘block’ rotating – an innovative effect to watch during gameplay.

Filling the grid with clusters takes you through to the Bonus Feature, the ‘Treasure Room’. An interactive pick-and-click game takes place, where the player has the opportunity to boost their Multiplier value by unveiling hidden symbols. Plus, there is the opportunity for players to win x1000 their bet.

Head of Games at Play’n GO, Charlotte Miliziano said. “We’re always developing new ways to up the ante with our features and Rotiki is truly impressive. From the sideways cascade to the pick-and-click game, every feature has been considered for the players’ entertainment, for a title that will keep on giving for years to come.”