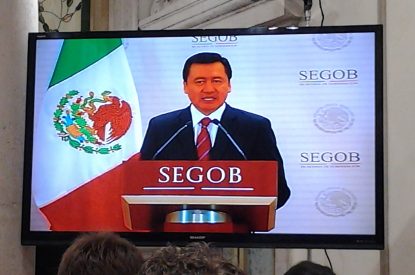 Mexico’s gaming regulatory body SEGOB (The Interior Ministry) has revoked the federal permit that had permitted yet another company to operate gaming in the country – this time Megasport S.A. de C.V. The company had a licence which gave it the largest capacity for future expansion in Mexico.

The company was first granted the right to operate gaming in Mexico during the Presidency of Ernesto Zedillo (1994-2000). The company had a licence which was valid for up to 38 years for a total of 96 establishments, of which it currently operates 40. According to SEGOB officials, the license was revoked because the company had used a false municipal permit in order to run the “Casino Fortune 777” – located in the city of Ixtapaluca in the State of Mexico.

From a total of 35 permit holders, three gaming licences have now been revoked: MegaSport, Mexico Entertainment, Exciting Games while one licence has expired: Sabia .
The Directorate General of Gaming at the Interior Ministry reported the administrative proceedings against the company regarding its casino, which was located in a shopping mall this week, but the company was notified of the administrative decision in October.

The recent closures could be another sign that SEGOB is paving the way for a new gaming act which is currently being discussed by lawmakers and follows a number of high profile closures of late.  Earlier this month, a Mexican Court upheld the revocation of the license granted in 2005 to Entretenimiento de México (EMEX ).The licence allowed EMEX to operate 50 casinos for 25 years. In addition the Interior Ministry also recently suspended the licences of four casinos in Mexico City in a major operation involving members of the Interior Ministry and local police forces.

Hopes are running high that Mexico could finally pass a new gaming act. If reforms go ahead then the industry could see as much as U.S$300m being invested annually through the installation of 50 gaming rooms per year. At the same time the law will ban the so called “umbrella” licences whereby operators were able to operate a number of slot parlours and sports betting shops under a single licence. Instead, each casino or gaming establishment will be issued a single licence per gaming establishment.