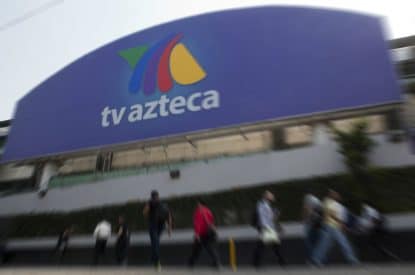 Two months before the administration of President Enrique Peña Nieto is set to end Mexico’s Interior Ministry (SEGOB) has granted TV Azteca a 25-year long licence that grants the company permission to operate a land-based casino as well as offer online gambling.

TV Azteca will be able to operate an online casino and will be allowed to take bets on sporting events, which take place either abroad, or in Mexico as well as on horse and greyhound racing. The licence was granted by the Head of the Gaming Board within SEGOB Eduardo Cayetano Cacho Silva last month. The land-based casino will be located in Yanga, located in the southern area of the State of Veracruz, about 80 km from the state capital of Xalapa. The town was formerly called San Lorenzo de los Negros or San Lorenzo de Cerralvo. The casino will be called Gander Azteca, translating roughly as Aztec Winner.

TV Azteca is a Mexican multimedia conglomerate owned by Grupo Salinas a corporate conglomerate formed in 2001 by several Mexican companies. It is the second-largest mass media company in Mexico after Televisa.

According to local press, the move mirrors a situation in 2005 when, six days before leaving SEGOB, then Interior Minister Santiago Creel granted permission to Televisa, the largest Mexican multimedia mass media company in Latin America and in the Spanish-speaking world, to open 65 gambling houses in Mexico.

The move came after then President Vicente Fox granted the then Interior Minister Santiago Creel the power to grant licences. Before leaving office in 2005 Creel granted 763 licenses to gaming parlours all over the country. Televisa was given permission to open a total 65 bingo halls in 2005.

Today Televisa’s gaming division operates 7,200 electronic gaming machines as well as a sports betting website. However, in August it was revealed that Televisa was analysing the possible sale of its PlayCity Casino betting business as part of its divestiture of non-strategic assets. PlayCity Casino is the business segment that operates under subsidiary Apuestas Internacionales, which also controls Sorteos del Trébol – its lottery and raffles brand.