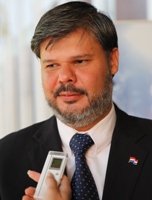 The Director of Paraguay’s Department of Charity and Social Welfare Fernando Mendoza Rojas has called for cooperation between regulators to help the least developed countries in the gaming sector such as Paraguay.

Speaking at the Second Iberoamerican Gaming Summit, he called for greater collaboration amongst nations and asked that nations work together to prevent gambling addiction and money laundering.

Director General of the Mexican Gaming Control Board , Luis Felipe Cangas who was accompanied by regulators from other countries such as Panama, Chile, Paraguay and Portugal added that customer security was now a key issue when it came to gaming in the region with the advent of online gambling and subsequent data transfer over the Internet. The idea of creating a commonly shared international set of regulations for gaming was introduced during the second day of the conference by the Director General for Gaming Planning in Spain, Carlos Hernandez Rivera.

Both representatives of Paraguay and Mexico pointed out that major changes are on the way when it came to online gaming in each of their respective countries. Mr. Cangas defined the Mexican market as an “emerging market” and said that Mexico is currently in the process of renewing its gaming laws so that they will cover online gaming. He also expressed his hope that new regulations, now currently under consideration, are centred on transparency and emphasised the intention of the Gaming Board to to increase the number of land based permits from 312 to around 700.

Meanwhile Mr. Rojas explained that Paraguay was well on the way to regulating the online industry and said that new legislation should be in place by the final months of 2015 or early 2016. Head of the Chilean Gaming Control Board Renato Hamel also called for more cohesion in the region and stressed the need to establish a level of legislative coherence for the online gaming industry.

Calls for more cooperation were echoed by Executive secretary of the Panamanian Gaming Control Board, Eric Ivan Rios, who said that the establishment of common rules when it came to gaming would be a positive step as there is already good communication between gaming onto boards across the region and that they share similar concerns.