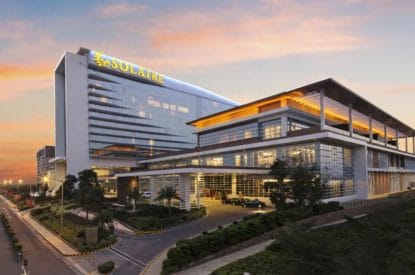 Bloomberry Resorts saw each of its revenue segments grow at its Solaire Resort & Casino in the Philippines and its Jeju Sun Hotel & Casino in Korea) pushing it to its highest levels of EBITDA and net profit since its flagship property Solaire opened in March 2013.

Both EBITDA and net profit growth were supported by record levels of gaming volumes and gross gaming revenues (GGR) across the VIP, mass tables and electronic gaming machine (EGM) segments, non-gaming revenues, as well as effective cost containment initiatives. Profits reached P7.2bn up 18 per cent year-on-year despite higher interest expenses.
Consolidated net revenues and EBITDA were P38.220bn and P14.895bn, representing year-on-year increases of 16 per cent and 21 per cent, respectively, due to higher revenues across all segments and effective cost containment initiatives Despite the ramp-up of the newest player within Entertainment City, consolidated promotional allowances increased by only 10 per cent, while the increase in cash operating expenses were tempered at 13 per cent.

Enrique K. Razon Jr., Bloomberry chair and CEO, said: “I am pleased to report that Bloomberry continues to be a trailblazer in the Philippine gaming and entertainment scene with our worldclass integrated resort offering, Solaire Resort and Casino, delivering record revenues and profits in 2018. We look forward to 2019 and to sowing the seeds of our future growth, as we anticipate to break ground on our second integrated resort in Quezon City this year.”
In 2018, total GGR at Solaire was P50.972bn, representing an increase of 14 per cent year-on-year. Solaire’s VIP volumes in 2018 were the highest ever for the property at P810.bn, increasing by two per cent despite the ramp-up of the newest player within Entertainment City.

VIP GGR was P21.817bn, representing an increase of five per cent. Full year mass table drop and EGM coin-in at Solaire also reached record highs of P44.894bn and P211.887bn, representing year-on-year growth of 22 per cent and 15 per cent, respectively.

The company added: “Growth in our mass gaming segments was supported by a 14 per cent annual increase in property visitation to 6.649m, robust domestic discretionary spending and the increasing participation of international gaming patrons. Mass table revenues were P15.258bn, up by 27 per cent while EGM revenue was P13.897bn, higher by 18 per cent compared to the previous year. In the fourth quarter of 2018, total GGR at Solaire was P13.231bn, 29 per cent higher than the GGR recorded in the same period in 2017. VIP, mass tables, and EGM GGR recorded YoY increases of 53 per cent, 18 per cent, and 10 per cent, respectively In Korea, despite the gambling prohibition on locals and meaningfully deteriorated tourist visitation, Jeju Sun reported a 19 per cent increase in annual gaming revenues to P484bn. Strength in both the Philippines and Korea gaming segments enabled the company to grow its consolidated gaming revenues to P48.232bn, representing an increase of 14 per cent against consolidated gaming revenues in 2017.”

It also recorded its highest ever consolidated non-gaming revenue of P6.615bn, representing growth of 11 per cent. Growth was driven by higher hotel occupancies at both the Bay and Sky Towers, higher frequency of productions in the Theatre at Solaire, and increased rental income from new tenants at The Shoppes. Hotel occupancy at Solaire in 2018 was 92.6 per cent, representing a 1.9 percentage point increase from the 90.7 per cent occupancy in 2017.

The company added: “Bloomberry has been diligent in managing its expenses by rolling out cost-containment initiatives and programs. In 2018, consolidated cash operating expenses increased by only 13 per cent despite the 16 per cent increase in net revenues. The increase in cash operating expenses was mainly due to higher gaming taxes as a result of record GGRs in Solaire’s VIP, mass tables and EGM segments, salaries and wages, outside services and charges, and cost of sales.”