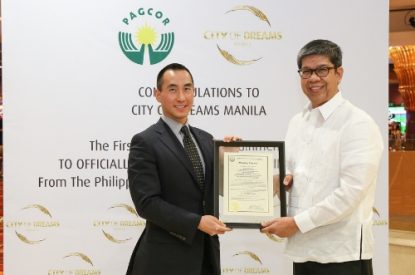 Melco Crown’s City of Dreams Manila has become the first property in Entertainment City to receive the regular gaming license from the Philippine Amusement and Gaming Corporation (PAGCOR) for having met the minimum US$1bn investment under PAGCOR’s regular license requirement.

Lawrence Ho said: “We are proud and honoured to receive the regular gaming license as it is a tremendous show of confidence by the government in Melco Crown Entertainment and our local partners, the SM Group’s Belle Corporation. We have delivered a world class entertainment venue to the Philippines and have raised the bar for integrated resort development in Entertainment City. We are proud of our contribution to the Philippines and pleased to have created over 5,000 desirable jobs at City of Dreams Manila. We will continue to cater to the increasingly affluent and growing middle class across Asia, who are seeking new travel destinations and entertainment experiences in the region.”
Mr. Sarmiento added: “Since opening, City of Dreams Manila has contributed to the integrated casino resort industry in the country. PAGCOR is pleased that City of Dreams Manila has demonstrated strong operating competency, and with just a few months after its sneak preview last December, the PAGCOR Board of Directors is happy to issue to it the regular gaming license to operate a casino resort in the Entertainment City area. PAGCOR truly recognizes City of Dreams Manila’s contribution to the Philippines’ sound investment scenario as the fastest growing economy among emerging markets in Southeast Asia.”