Playson: The journey is our reward 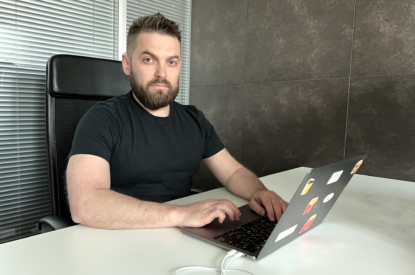 Over recent years, Playson has evolved from an emerging developer to one of the most prominent suppliers in the igaming industry.

Reflecting on the company’s 10-year anniversary, CEO Alex Ivshin hails the removal of nearly all the company’s previous games from its platform in 2018 as the turning point.

We begin our interview discussing what matters most – the situation in Ukraine – where a big part of Playson’s team is based.

Alex explains how the supplier is continuing to grow at pace under such difficult circumstances and outlines what the company is doing to support its team.

Since Russia’s invasion in February, many of Playson’s employees have chosen to defend their country by helping in the fight against disinformation, volunteering for the Ukrainian Armed Forces, and helping with resettlement, food, and logistics for Ukrainian refugees.

“It’s a very complicated and difficult situation. From day one, we started working on finding locations closer to the border of Hungary and Romania. Any real estate – hotels, hubs – that could host employees we paid for and offered financial support for relocation costs.

“We have a temporary hub here in Slovakia and are offering it to everyone who can leave the country. 60 per cent of our team is still in Ukraine because many cannot leave so we are spending significant amounts to help employees and their families.

“We are not counting expenses or optimising costs – now is not the time and there is no question of doing so. We are helping where and however we can. On top of this, we are also offering our help to defence organisations and volunteers.”

In May, Playson announced that Oleksandr Honcharuk, who had been working as a product owner for the content developer, died while fighting in Ukraine. Honcharuk joined the business in March 2020 and was based at Playson’s development studio in the Ukrainian capital city of Kyiv.

Before his time with Playson, Honcharuk worked as a casino games consultant for more than two years, prior to which he was a games director and product owner at Techona, based in the Czech Republic. Earlier in his career, Honcharuk was a game product and studio manager at Playtech and art director supervisor at NetEnt.

“We are devastated to lose such a cheerful, witty, kind, honest, and smart individual who we regarded as an outstanding colleague, but a great friend too,” Playson stated in its commemoration of Oleksandr.

“While his creativity and enthusiasm played a crucial role in the development of Playson’s recent top-performing games, his loss will also be felt throughout the wider industry, having worked across many companies during an igaming career spanning more than 14 years.

“Our deepest sympathies are with Oleksandr’s family and friends. He will be sorely missed. Rest in peace, Oleksandr.”

Despite Russia’s invasion, a week doesn’t seem to go by without news of the slot developer signing a distribution agreement, releasing a new game, launching a tournament, or making a new hire.

From a technical perspective, Alex says the pandemic has helped the company prepare for the difficult business circumstances caused by Russia’s invasion. “Covid has been a significant influence.

“After two years of a pandemic, we are now proficient at working remotely. When the war began in Ukraine, we didn’t have to spend time setting up processes already in place. There remain issues but big thanks to Elon Musk for setting up Starlink and our HR team and managers for ensuring employees aren’t overburdened.”

This summer has seen Playson achieve 10 years in business. With the ongoing war in Ukraine, the appetite for celebrating is minimal, but the anniversary does provide a moment for Alex and his team to reflect on past milestones and focus on what’s next for the company.

“When you are a new business, the first, second and third-year milestones are very important, but beyond that they become less significant. Our focus is on what’s next. We are at the top of a wave and now we need to look at continuing to differentiate and bring something new to the industry.

“Implementing new things to the business is crucial. It has been a long road during the last decade building Playson to where it is now and there have been a lot of learnings made, but these have made us stronger. We have achieved a lot, our games are live in 20 regulated markets and with 140 partners, but it is for players, partners, and industry peers to judge.

“We will celebrate the anniversary by sharing gifts with our team and offering a tournament with a good prize pool. The prizes will then go to the charities chosen by the winners.”

In March, Playson revealed a new brand identity including a revised modern logo, designed to reflect the company’s ‘leading position in the industry’ and its ‘bold ambitions’ to deliver the ‘Playson experience’ to customers worldwide.

The refreshed identity comes at a pivotal moment for the company following commercial growth in iGaming markets across Europe. In June, Playson penned an agreement to provide Bulgaria-based operator Inbet with its slot suite. In May, similar distribution deals were struck with Magic Jackpot in Romania and Kiron Interactive for African markets. In April, the developer’s games went live with Admiral Croatia, Tuko Productions in Italy, and BalkanBet in Serbia. The list of partners reads like an operator directory.

“We perform well in regulated markets, particularly in Ukraine, even during wartime,” says Alex. “We are growing in Bulgaria, Romania, and Italy. I cannot yet judge our performance in the Baltics as the markets are so small.

“We were recently certified for the Swiss market and are working on potential deals with customers there. We also believe we can operate in the UK market soon and in some new Balkan markets, as well as Mexico where we are cooperating with Caliente.”

Playson’s decision to introduce a fresh identity follows a series of internal improvements within the organisation, which has seen several processes updated in line with its global growth strategy. This includes a new product development approach that will influence its future product roadmap. The company, says Alex, is more determined than ever to produce exciting gaming products with engaging math, wrapped in beautiful aesthetics.

“A product company without a good product cannot be successful. Around 2018 we adapted our product strategy to create games designed focused on putting players at the forefront. We looked at the wider industry to identify what does and doesn’t work and subsequently removed almost all our previous games from the platform.

“From that moment, we started growing at pace. It’s about what I like to call ‘putting a cherry on top’ – an extra five per cent of effort that brings huge results. Going forwards, researching market trends and penetrating new jurisdictions is the priority. We know our current limitations. For instance, we don’t have products that perfectly fit the UK and Nordic markets, so there is room for expansion.”

Alex explains that the developer is looking at the U.S., one he describes as a ‘new market with huge potential’, but the importance of making the right first step cannot be underestimated.

“If you make the wrong move, you shoot yourself in the foot. We are looking at how other providers are doing and have discussed potential opportunities with established organisations within the gaming industry.

“The U.S. is not like Europe insofar as one certification means you’re good to go. It’s a state-by-state approach meaning lots of paperwork. Identifying the right partner to conduct successful business is crucial.

“We will expand into the U.S., but we need more time to research how best to go about it. It won’t be this year, but I have hopes for a 2023 launch.”