Poland – STS signs with Cracovia for the next three years 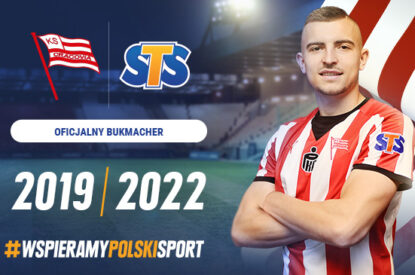 STS, the largest bookmaker in Poland, has extended its sponsorship agreement with Cracovia. STS will be the official bookmaker of the club, and its logo will still be placed on the players’ T-shirt sleeves.

The new agreement will remain in force for another three years, until June 2022. STS has sponsored the club since 2016.

Mateusz Juroszek, CEO of STS, stated: “STS is the largest private sponsor of Polish sport. We cooperate with over a dozen clubs, organisations and associations that operate not only in Poland but also internationally. Cracovia is a partner that is very important to us; it helps us reach a lot of sports fans all over the country. Since 2016 we have been organising a number of activities addressed to the club supporter.”

The extension of the agreement includes the display of the company logo during matches played in Kraków e.g. on boards, LED boards and media walls. In addition, the agreement also provides for the publication of content on the club’s website and social media cooperation. The bookmaker will also organise a special fan zone during selected matches and will offer special bets for Cracovia matches. STS will also arrange special activities for the club and its supporters, including joint marketing campaigns.

Since February 2019, STS has been operating in European markets and services are available in the UK, Germany, Norway, Iceland, Luxembourg, Slovenia, Andorra, San Marino, as well as in Gibraltar, Malta and Latvia. STS employs over 1500 people.