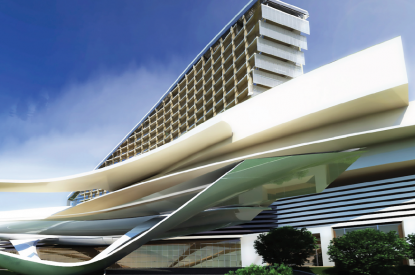 Russian casino developer Diamond Fortune has revealed its plans for its US$900m Selena World Resort & Casino in Russia’s Primorye gaming zone, in Russia’s Far East near Vladivostok, complete with its own ski slope.

It will be the fourth project destined for the zone following the opening of Tigre de Cristal and the commitment to develop projects from NagaCorp and Royal Time.

Sun Casino will consist of two hotel towers with a combined 900 rooms and a gaming floor of 375 gaming tables and 1,800 slots.

Golden Gate mean while will boast 576 hotel rooms, 200 gaming tables and 2,100 slots. The property will also feature a 350-meter-long ski slope. Moon Gate, which in Chinese culture symbolises a luxurious doorway to the gardens and palaces of the upper class, will house 460 rooms, 110 tables and 1,100 slots.

Diamond Fortune’s General Director Georgy Kondakov said the total build-up area would be over 174,000 square meters. He added that the project had been designed by Steelman Partners.

“We sure that our hotel and entertainment complex will be attractive for guests and as a place for family recreation and tourism,” he said.

In terms of the zone itself, he said it would benefit from favourable visa policies for Asian visitors with 300m Asians within a three hour flight whilst the local population and port industry would provide an incremental revenue source.

He also said that the venue would benefit from one of the lowest tax rates on gaming in the world.

The first complex will cost about $35m with a return on investment of a year and a half. The development of the second and third hotel and entertainment complexes will be financed by the profits obtained of the first casino.