Russia – NagaCorp remains on course for Primorye opening next summer 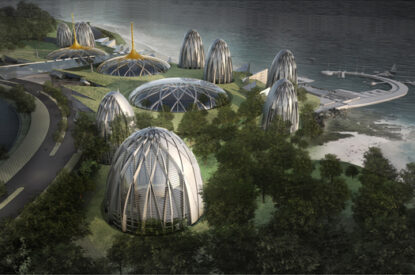 Cambodia-based casino group NagaCorp remains on course to open its huge casino project in the Entertainment Zone of the Primorye Region near the port of Vladivostok in Russia’s Far East next summer.

The resort is being built in three phases, with the first phase which saw an investment of up to US$200m breaking ground five years ago. It has been designed by Las Vegas casino architects, Steelman Partners and will house 100 gaming tables, 500 slots, a 2,000 capacity theatre and a spa.

Timothy McNally Chairman NagaCorp said: “Based on the current state of development, our gaming and resort development project in Vladivostok, Russia remains broadly on schedule. Site clearing commenced in 2016 and we have now established an office at the city center of Vladivostok, and certain key personnel have been appointed to monitor various aspects of the progress of the project. We anticipate that our Vladivostok project will open in Summer 2021. We believe our strategy to diversify our business geographically and expand into new casino markets will drive revenue growth in the long term.”

In Cambodia, NagaCorp continued to generate positive operational and financial results for shareholders of the Company for the year ended 31 December 2019 with net profit of US$521m, a 33 per cent increase over last year. Gross Gaming Revenue for the year increased by 20 per cent to US$1.7bn.

Mr. McNally said: “We continued our trajectory of supply driven growth, once again making us one of the best performing gaming stocks globally in 2019 in terms of share price appreciation. Our positive results were attributed to a combination of solid business strategy and acumen, operational and execution efficiency, and an increasingly vibrant tourism market in a politically stable country, leading to an increase in business volume across all segments of the gaming business. Specifically, the opening of Naga 2 in November 2017 has significantly increased the appeal, capacity, quality, range and reach of our VIP, mass gaming and non-gaming offerings.”

The top three sources of arrivals – China (37 per cent), Vietnam (14 per cent) and Thailand (seven per cent) – collectively accounted for 58 per cent of total visitation to Cambodia. Arrivals at Phnom Penh International Airport grew nine per cent over the corresponding period (Source: Ministry of Tourism, Cambodia). The increase in international arrivals into Cambodia was driven by the country’s political stability, an abundance of business opportunities in an emerging market, and increasing appeal as a travel destination.

The group continued to achieve solid growth in the Mass Market segment where Public Floor Table buy-ins and electronic gaming machines (EGM) bills-in increased by 33 per cent and 25 per cent respectively. This business volume growth was attributable to the increasing visitation at both Naga 1 and Naga 2 as a result of tourism growth into Cambodia, particularly from China which recorded 20 per cent growth in the first 11 months of 2019.

Mr. McNally added: “The competitive overseas junket incentive program introduced in March 2013 continued to enable the Group to balance the increase in table limits while managing volatility and credit risk. The VIP Market continued to register robust growth, as a result of increasing market acceptance of the combined NagaWorld Complex as an integrated gaming and entertainment destination.”

During the Year, a few junket operators commenced fixed base operations at Naga 2, contributing to the increase in the number of higher-end VIP players from the region and in total rollings. Overall, the VIP Market segment saw a 31 per cent increase in rollings to US$46.6bn, with a win rate of 2.7 per cent. This translated into a 16 per cent increase in VIP Market revenue to US$1,243.1m during the year.

Mr. McNally added: “With the expected completion of Naga 3 by 2025, the additional property will increase the capacity of the combined NagaWorld Complex by at least two times. It is currently expected that the combined NagaWorld Complex together with Naga 3 will have about 5,000 hotel rooms, 1,300 gaming tables and 4,500 EGMs and many other non-gaming attractions, and is expected to be one of the largest integrated entertainment complexes in the world. The Company believes that the launch of Naga 3 is not only timely, but also the answer to meet future demand and a surer way to continue the company’s journey of earnings growth, especially after the recent successful ramping up of Naga 2.”