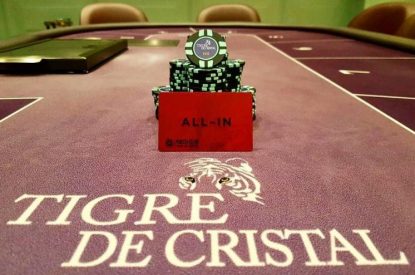 An off-shore Russian subsidiary of Hong Kong-listed Summit Ascent Holdings has increased its shareholding in Oriental Regent Limited (ORL), the operating force behind Tigre de Cristal in Primorye near Vladivostok, by 10 per cent to 77.5 per cent in a move that will help fund the Phase II expansion of the casino.

It could still increase its stake to approximately 89.29 per cent if Summit Ascent is the only subscriber of the new issue of ORL.

Mr. Chau Cheok Wa, Chairman of Suncity, also Chairman of Summit Ascent, said: “The potential to acquire further stakes in Tigre de Cristal is a strong injection in confidence that both Suncity and Summit Ascent are fully motivated to drive up business volumes in Tigre de Cristal. Besides, the outstanding recovery post-closure was as astounding as it seems during one of the worst business challenges in this pandemic – a solid proof that we could sustain in hard times with local businesses
only. Going forward, both Suncity and Summit Ascent will continue to tap into the under-served Korean and Japanese markets in the future.” Both Summit Ascent Holdings and its majority shareholder, Suncity Group, announced early Tuesday that the former was also one of two current ORL shareholders to take part in a shares subscription to raise an additional US$65 million for Tigre de Cristal Phase 2.”

The company said: “The planning and design of Tigre de Cristal Phase II is well under way, as such, each shareholder of ORL should pay for its respective share of capital expenditure to build Phase II. The share acquisitions, through convertible bonds (five-year zero-coupon at a conversion price of HK$3.50 per conversion share) and cash, by Summit Ascent, as well as the proposed new issue of ORL, can be interpreted as a strong support from the major shareholder Suncity. This is also an indication that regardless of Tigre de Cristal’s existing shareholders’ financial statuses, Phase II will go ahead from blueprint to brick and mortar as planned.”

Tigre de Cristal Phase I is already the largest integrated resort in the Russian Federation. Phase II will add to this aura by becoming even bigger and better. The master plan of Phase II is to double the size of Phase I, as well as tripling the number of hotel rooms. Phase II will also include the finest restaurants serving authentic Asian delicacies ranging from Korean barbecue to international flavours serving freshly caught seafood from local waters; as well as a state-of-the-art indoor beach club. The beach club will be an attraction in itself, where a tropical indoor beach and snowy outdoors could coexist in winter, separated by a glass panel. It will become a sense of place where electrifying beach events can happen all-year-round in Primrosky Krai, pushing the boundaries of imagination of what one could be doing during icy-cold winters.

It added: “There are virtually no restrictions on the number of gaming tables and slot machines. [The] Sky is the limit on how Suncity could assist in driving business volumes to Tigre de Cristal, especially taking into the account that Suncity will be setting up a direct VIP business line, where high rebates originally offered to junkets could be kept within Tigre de Cristal, a proposition not being made possible without an attractive gaming tax regime.”

Since the reopening of Tigre de Cristal from 16 July 2020, Summit Ascent has recorded relatively good recovery in the mass table and slot businesses, primarily driven by local Russians, given flights and visa application have not resumed yet. Based on preliminary figures, Tigre de Cristal has already turned EBITDA-positive in August and September 2020 because of the resilience of the mass table and slot businesses.

The operator explained: “With only two and a half months of operations after closure, Tigre de Cristal’s slot handle recovered and even outperformed the pre-COVID average. Mass table drop also recovered to 96 per cent of the pre-COVID average. This is a great sign to show that the Group is not reliant on a single source of travellerslike Macau. The local Russian businesses could already help Tigre de Cristal to stay afloat in a time when COVID travel ban is still in place.
Given the proximity of Vladivostok to major Asian tourism markets such as South Korea and Japan, Koreans and Japanese are naturally the next target markets when international travel resumes. In fact, it takes a shorter time for a Korean gaming patron to fly to Vladivostok from Seoul, than for him to
take a train from Seoul to visit the only local-permitted casino in South Korea.”

The Korean market is under-tapped and under-served, as seen in the USD1.3bn gross gaming revenue that was contributed by the only local-permitted casino in 2019, already accounting for more than half of the entire nation’s gross gaming revenue. The local Russians, the Koreans and the Japanese will be Summit Ascent’s focus in the near future.

According to a Hong Kong Stock Exchange filing, Summit Ascent has agreed to subscribe to 234,755 shares at a cost of US$53.6m, which when complete will boost its stake to 77.5 per cent.