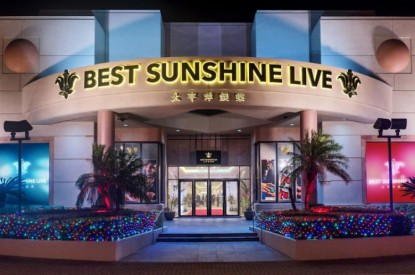 Imperial Pacific’s temporary casino Best Sunshine Live has delivered again in what are its last six months of results.

The operator has shut the 16 table temporary facility and opened its gaming floor at Imperial Pacific Resort on July 6. It plans to open VIP rooms by the end of 2017.

VIP rolling chip came in at HK$196.3 billion, marking an 87.6 per cent increase on 2016 with each table generating an average of HK$443m in revenue during the first half of the year.

Imperial Pacific said: “A significant portion of our VIP casino customers is sourced through the group’s own marketing avenues,” it said. “Such high-spending VIP players generally receive commission and allowances based on a percentage of the rolling chip turnover. The Group’s VIP players are also brought to us via intensive marketing campaigns. VIP gaming operations also include premium mass gaming operations that do not receive commissions from the Group. In addition, a minor operation of the Group’s VIP customers has been sourced via a new licensed junket operator since August 2016. The establishment of a new licensed junket incentive allowed the Group to bring in new players which mitigated the Group’s credit concerns. Geographically, most of our direct VIP patrons are from China, Hong Kong, Macau, Korea and Saipan.”

When fully operational, Imperial Pacific Resort will house 193 gaming tables and 365 slots. It currently has 48 tables and 141 slots.

“With the transfer to the new casino completed, we believe that new players and clients will continue to be attracted to Saipan and hence broaden our client base,” the operator added. “We are also planning to open more VIP gaming rooms by the end of 2017. With the gaming capacity to be further enhanced, we expect to commence collaboration with gaming promoters after they are granted junket operator licenses to operate on the Island of Saipan. Due to CNMI’s low tax regime, we believe we will be able to offer very competitive commission rates to our gaming promoters. We currently have three villas and five yachts in place as well as hotel rooms secured from local high quality hotels to better provide accommodations to our VIP customers.”