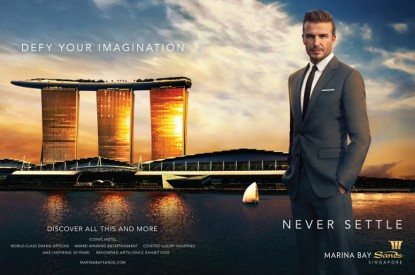 Directed by award-winning American director and photographer Anthony Mandler, the multi- million dollar “Never Settle” campaign enables consumers to discover the integrated resort through the eyes of Beckham in a series of print and television commercials. Featuring Beckham at the iconic architecture marvel, the campaign highlights the luxury retail, fine dining, leisure and entertainment experiences that have become synonymous with Marina Bay Sands.

“The Never Settle campaign brings to life the shared values and passion of Marina Bay Sands, our consumers and David Beckham, celebrating the spirit of advancement that inspires an ongoing pursuit of excellence. It’s about experiencing the best that life has to offer. As we progress into 2015, we’re committed to delivering exceptional and memorable experiences that live up to the Never Settle concept,” said George Tanasijevich, CEO and President of Marina Bay Sands.

The four advertisements from the campaign will appear in local and regional dailies, magazines and billboards across Singapore, Indonesia, Malaysia and China, with the commercial airing on various digital platforms, TV and network cable channels.

In the 2-minute commercial, Beckham can be seen pulling up in a sleek vehicle and entering
into the glitzy world of Marina Bay Sands. The many experiences that unfold within the awardwinning
destination are illustrated through scenes of Beckham experiencing celebrity chef restaurant CUT, making a grand entrance into the Chairman Suite, enjoying the city’s best night views from Sands SkyPark, and raising a toast to fellow party-goers. The energy and excitement of the award-winning property are juxtaposed with scenes of tranquility at the Banyan Tree Spa, the integrated resort’s inner haven.

David Beckham said: “I have collaborated with Marina Bay Sands on a wide range of projects ranging from charity events, inspirational workshops and festive celebrations. This is a brand that always aspires to be the best in everything it does. That’s why I love Marina Bay Sands. I am thrilled to be part of its story for the ‘Never Settle’ campaign, which is about a celebration of an amazing destination.”
Filming took place over two days, involving overnight shoots that began at 4am on the first day.
Most of the filming was done within cordoned off areas, under tight security conditions and in the
early hours of the morning – this was to ensure minimal disruption to the guest operations of
Marina Bay Sands, which welcomes nearly 110,000 visitors on a daily basis.

Due to the secrecy of the campaign, David Beckham had to travel to the various locations through the back-of-house routes, and only appearing right before filming commenced. The tons of equipment also follow the same routes in the labyrinth of passages known as the Heart of House – an area that has its own 7-Eleven store, ATM machines, clinic, a Uniform Room and Dining Rooms that serve over 8,000 meals a day for Team Members.

You can watch the full Marina Bay Sands advert on the Homepage of G247.