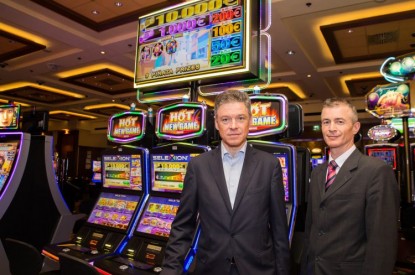 “Across our organisation we’re focused on delivering a rich array of fun enjoyment for guests to experience, which Smash Smash Festival has helped support above and beyond expectations at Park Casino,” said Aleksander Škrinjar, Head of Business Development at HIT Group. “It has a phenomenal effect that is truly surprising, delightful, and rewarding for so many that enter our doors.”

Smash Smash Festival is an original linked progressive development that gradually increases the number of mystery rewards in a winner-takes-all prize pool, instead of traditional progressive meters. The mystery prizes are hidden in colourful piñatas, which players smash open to reveal their award. Working the regional distributor Intergames d.o.o., Park Casino had featured Smash Smash Festival across a bank of six Concerto Slant™ multi-game machines, with an overhead LCD sign display.