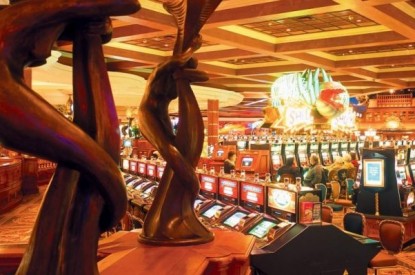 In October 2020 the lucky player said she was drawn to Aristocrat’s Mighty Cash, a game involving Chinese dragons. “There are only three of these machines at GrandWest all lined up next to each other. They looked interesting, so I decided to play one of them,” she said.

“I shouted out to my friends who were playing on the other side of the bank. Staff and my friends came running over, and the GSA checked and certified my win. I can honestly say that everyone was happy for me and just as excited as I was.”

But the Dragons still had a bit more treasure to deliver. Returning to GrandWest the following week, she decided to play at the second of the three Dragon machines. This time, she won over R245,000 (€13,000). The following day she played on the third dragon machine and won just under R235,000.

Her winning streak didn’t end there. A week later, the lucky patron played on the Aristocrat’s Pompeii slot. This time she won R400,000. But luck clearly runs in threes for her because over the next 10 days, she won an additional R565,000 and a further R228,000.

Asked what she will do with the money, the MVG member said she will use her winnings for good. “I can’t stand begging so I don’t talk about my wins, which allows me to react to people whose needs touch me. For example, I’ve used part of my winnings to pay for someone’s medical bills and rent. I also keep money on me to give to homeless people.