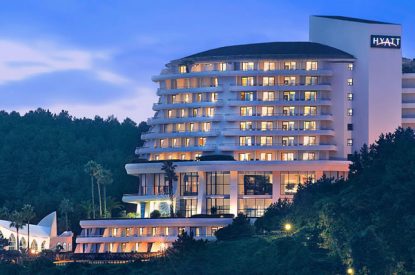 Genting Hong Kong has now opened its first casino on the South Korean island of Jeju.

Located at the Hyatt Regency Jeju Hotel, the new Genting Jeju Casino is a joint venture between Genting and Landing International Development, each of which holds a 50 per cent stake in the venture.

Yang Zhihui, chairman of Landing International, said: “The opening of Genting Jeju Casino marks a big step forward on the company’s development of integrated resort and tourism properties in the global markets. As one of the most striking landmarks in Jeju, Genting Jeju Casino is expected to drive tourism and retail growth in the city, further enhancing Jeju’s leading position in Korea’s tourism.”

Jeffrey Teoh, Genting HK’s executive vice president of casino marketing & CEO of Genting Jeju, added: “At Genting Hong Kong, we remain committed in taking an active role to contribute towards the development of Jeju’s tourism industry. With our newly launched land-based attraction and experienced cruise operations via Star Cruises, we will continue to share our international expertise in leisure and entertainment to further support and enhance the overall domestic tourism industry here on Jeju Island.”

Genting purchased the property for US$117.2m. The move to buy an existing casino has seen the Genting brand enter Jeju earlier than expected following delays to its $2.2bn Resorts World Jeju, a project where it is also teaming up with Landing.

The casino in the Hyatt Regency is one of eight gaming licenses in Jeju under the Tourism Promotion Act.