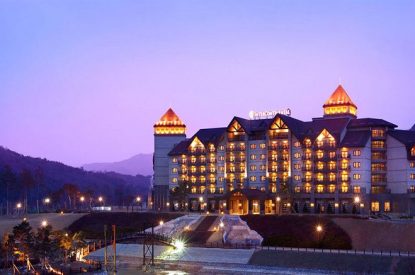 Landing International Development, a Chinese real estate company, is to take over operations of a casino in South Korea, marking its third casino investment in the country.

It will pay US$112m to take over Wealth Seed Group, which runs Alpensia casino at Holiday Inn Resort in Pyeongchang, in Kangwon, the province to host the Olympic Winter Games in February 2018. Alpensia meanwhile is the main venue for the 2018 Winter Olympics and Winter Paralympics

Landing stated: “Korea has been the group’s focus of business development and investment since the fourth quarter of 2013. The acquisition offers a valuable opportunity for the group to broaden its market share in the casino industry in Korea, and to diversify its investments from Jeju Island to Kangwon province. It is believed that the group can leverage on the prime location of the casino and the enormous marketing opportunity from the 2018 Pyeonchang Winter Olympics and raise the operation efficiency and profitability of the casino business. The acquisition will increase the group’s market shares and branding in the Korean casino industry, which will foster a positive synergistic effect on the other businesses of the group in Korea.”

It is already partnering with Genting Singapore to develop a US$2.2bn casino resort on South Korea’s Jeju Island. The two companies have also announced a 50-50 joint venture to take on a foreigners-only casino at Hyatt Regency Jeju hotel.