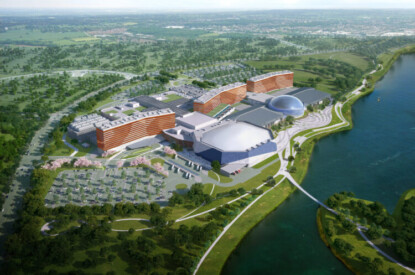 “Given the strong demand for K-pop and other live performances, Korea’s performing art industry has long been facing a shortage of high-quality that can support shows of top-tier artists from home and abroad, and various cultural events,” said Ray Pineault, CEO and President of Mohegan. “This perhaps explains the expectations building around the Mohegan INSPIRE Arena far ahead of its construction completion. This new venue is poised to emerge as Korea’s first multi-purpose arena that can showcase various types of events, encompassing global artist performances, world-class sports league tournaments such as eSports, MMA, TV award shows, and media IP-based exhibitions,” he added.

Mohegan INSPIRE shared its vision to deploy the know-how in developing and operating a world-renowned, seven-time ‘Arena of the Year Award’ winner, the Mohegan Sun Arena, to INSPIRE’s new arena. Coupled with a differentiated production infrastructure, the Mohegan INSPIRE Arena is set to transform the entire landscape of the domestic performance arts industry. As a globally recognized arena, Mohegan Sun Arena is chosen by many leading global artists including Mariah Carey, Lady Gaga, Billy Joel, and Queen as the first venue at which to kick off their tours.

Mohegan INSPIRE Arena will be equipped with a cutting-edge, full-stage monitor and video wall lighting to offer an optimal view from any seat, along with a HD×4K live broadcasting system to treat the audience to an enhanced immersive experience. Leveraging the advanced Meyer Sound Panther System to elevate performance sound quality will also help raise the consumer experience bar in Korea.

A core strength of the Arena lies in its highly efficient stage system that allows standard-specification stages to be installed or dismantled within just two hours. This means that the venue can put on a K-pop concert today followed by a global artist’s show tomorrow, enabling many different events to be held efficiently.

INSPIRE’s arena differentiators also include exclusive skybox suites on the 3rd and 4th floor of the venue with panoramic views of the stage, premium quality food & beverage and private entryway into the arena, catering to both groups and discerning individual patrons.

Mohegan INSPIRE has announced its ambition to attract over 4 million guests per year with the help of opening the first specialized performance hall in Korea. The facility is expected to provide INSPIRE with a competitive edge in the broader performance arts and culture industry through its cutting-edge infrastructure and exceptional programming.

“We are pleased to present Mohegan INSPIRE Arena, a multi-purpose performance hall that never existed in Korea before. We will strive to promote various aspects of K-culture from K-pop to K-lifestyle events to E-sports competitions,” said Michael Jensen, Chief Marketing Officer (CMO) of Mohegan INSPIRE. He added, “Through INSPIRE Arena, we shall promote the resurgence of the domestic performance culture industry and tourism industry of Korea, as well as provide lifetime memories to visitors and artists from Korea and the world.”

Soon to be the largest integrated resort in Northeast Asia, Mohegan INSPIRE’s construction is on track now with the aim to open in the 4th Quarter of next year. Once INSPIRE is open, the goal is to catapult Yeongjong Island to a status of a new entertainment mecca featuring top-of-the-line business and leisure facilities including three 5-star hotels, a large-scale ARENA dedicated to Tier 1 artists, a foreigner-only casino, a large convention center, an indoor water park and an outdoor family park.