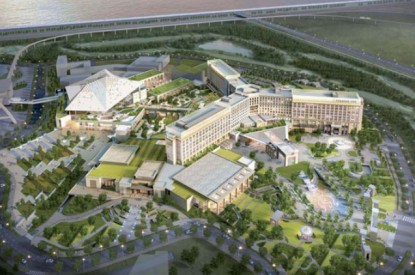 Newspaper reports out of Seoul are stating that Macau-based SJM Holdings has been offered the chance to jointly manage the future casino at Incheon International Airport by its owners and developers; Paradise and Sammy Holdings.

None of the parties involved have so far commented on the link. If it were to materialise it would mark SJM’s first move into South Korea and would give Paradise and Sammy access to SJM’s player database for what will be a foreigner-only operation. To be called Paradise City, it will open in the first half of 2017 at the airport’s International Business Center on Yeongjongdo Island at a cost of $1.2bn.
Construction work began on the resort in November. It will house 160 gaming tables and 350 slots alongside two hotels, a shopping mall and exhibition space.

Hajime Satomi, Chairman of the Board and Chief Executive Officer for Sega Sammy, said: “We’re convinced that Paradise City will achieve great development and become a driver of South Korea’s tourism industry as a major presence in the northeast Asian region along with Incheon International Airport, which is growing in stature as an Asian hub airport. In 2017, we promise to open Paradise City as a world-class site that will excite and amaze everyone who visits.”

Phil-Lip Chun, Chairman of Paradise, added: “We will build a true integrated resort that meets today’s needs while giving sincere consideration to culture, arts and people’s daily lives. Paradise City demonstrates direction on how to achieve a “creative economy” that produces new added value by combining industry and culture, and it will become a Renaissance space that will produce new value unlike any other.”