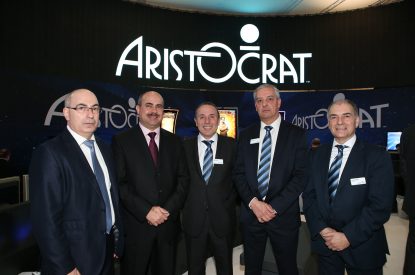 Aristocrat Technologies has introduced its first Class III games into the Spanish market.

Following their approval in Catalonia last month, the first Aristocrat casino games for Spain will be available to players at Casino de Barcelona and Casino Peralada, situated near the French border in the province of Girona.

Aristocrat Sales & Marketing Director – Europe, Donal Maguire said: “Spain is an important new Class III market for Aristocrat and we are naturally delighted that our first games there will feature in the country’s largest casino on the Barcelona waterfront.”

Josep Roig, Slot Operations Director for Grup Peralada’s Casino Division, added: “We have for some time admired the styling and reports of performance of the E*Series games and have great expectations of the new kind of experience that they will have on our players. The combined signage gives these games an added edge by creating a centrepiece destination for players, making for a complete package – an exceptional way for Aristocrat to mark its arrival in Spain.”