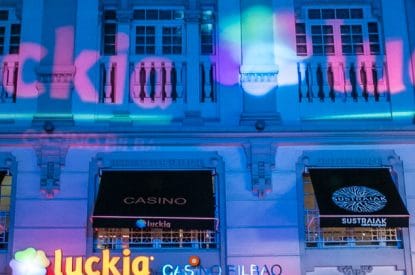 A new €5.5m casino could be up and running in the city of Vigo before Easter 2019 according to the President of the Luckia Group, José González Fuentes after a meeting with the vice-president of Government of Galicia, Alfonso Rueda, and the territorial delegate of the government in Vigo, Ignacio López-Chaves.

The new casino will boast an “avant-garde and very modern” design, which will generate around 105 direct and 75 indirect jobs. The announcement was made during a press conference at the government headquarters.

González said that a Peruvian architect had been hired who has already designed casinos in Las Vegas, Latin America and Europe, and in Spain. The company had looked at 30 locations before settling on the A Laxe Shopping Centre, which he said, was “an ideal place, with an excellent location.” This was because the shopping centre is close to the cruise ships and the north of Portugal and is located in the metropolitan area and the casino will be “a good complement” because it will boost the flow of people and “revitalise” the mall itself. “It’s a good opportunity for the mall, the casino and the city,” he added.

The new casino will have a 500-meter gaming floor, house 80 gaming machines and 12 blackjack tables, roulette, poker and other games. The owners will invest in developing the 1,700 square meter site in the lower level of the A Laxe Shopping Centre: Vigo’s newest shopping centre, located centrally in the port area of Vigo. The A Laxe gaming room will come with a bar and a small restaurant and will house the maximum number of games that regional laws allows with gaming tables, sports betting and slots.

González highlighted the willingness of the government to change the law so that there could be a casino in Vigo, which, he said, was the most important city in Galicia economically and in terms of population and that it “deserves and needs to have a casino more than any city in Galicia,” he said.

It was made possible due to government support although the road had been a slow one he said. Meanwhile local legislator Alfonso Rueda said that, “if everything goes well and is fulfilled as planned, in less than a year the casino will be up and running. Organised and controlled gaming is a source of wealth for the administration, creates jobs and boosts the area,” he said.

At the end of March José González Fuentes, and the manager of Cirsa, Braulio Pérez, met with the mayor of Vigo, Abel Caballero, and the councillor for Commerce, Ángel Rivas to discuss plans that would give the go ahead for a new casino. The agreement was dependent on planning permission for the building of the casino in Vigo’s free trade zone as well as the authorisation from the Government of Galicia. Both companies also own the Casino La Toja in the municipality of O Grove in Galicia.

The operators of the new casino officially presented their proposal to the local government with the intention of speeding up building permits and the authorisation from the Vice Presidency. The location is designed to attract demand from the south of the province as well as customers from the north of Portugal and crew working on cruise ships that dock nearby.

In legal terms, the Vigo room will be attached to the Casino La Toja but the owners will promote Casino de Vigo as a commercial brand on its own in order to differentiate itself. The Vice Presidency of the Government of Galicia announced in July 2011 its intention to revise regulations which had been in force since 1985 that allowed only one casino per province, required a local population requirement of over 300,000 inhabitants and blocked the expansion of Casino La Toja to the south. It was not until March 2016 that new regulations were finally passed when the government of Galicia recognised the economic potential of the proposal and the need to avoid the flight of potential casino customers to Portugal.

Caption: The Luckia brand in Bilboa