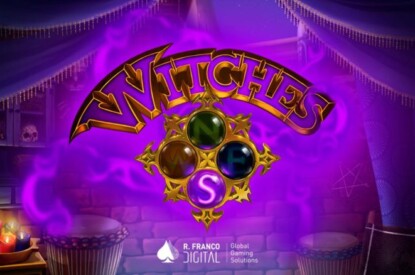 R. Franco Digital has cast a spell with the release of Witches South, a new online slot that adds voodoo spells to a world of adventure and enchantment.

Following on from the success of the Spain-based provider’s Witches North release earlier this year, this five-reel, four-row and 40-line sequel immerses curious players in a universe full of potions, plants and magic stones that could help them achieve their goal.

The witch of the south, a voodoo teacher, will help instruct the most adventurous in the secrets of survival. To achieve this, the willing apprentice must collect the largest number of pins to defeat the voodoo doll without suffering damage in order to pick up great prizes.

The dynamic gameplay within this new game is accompanied by multiple language options, while Witches South also features a Bonus symbol that triggers a choice of prizes when the symbol appears on reels one, three and five. The Free Spins game is triggered when the Scatter symbol lands on those same reels, awarding 15 spins with the possibility of re-triggers up to a maximum of 265 spins.

Commenting on the launch, Mario Benito, Commercial Director of R. Franco Digital, said: “With Witches South, we are challenging the most daring not only to play, but also to learn new techniques that will make their experience more exciting.

“We believe that the combination of an intriguing theme, fantastic visuals and dynamic gameplay offers players a new way to experience the world of online slots that is sure to be a success among our partners.”

Witches South is the latest addition to R. Franco Digital’s renowned games catalogue, which can be enjoyed by players based in Colombian, Spanish, MGA and Curacao-licensed markets.