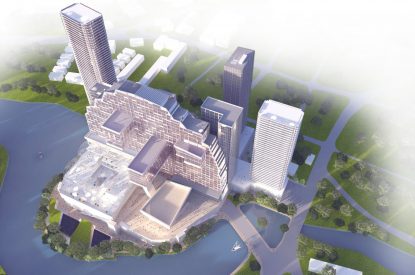 John Keells Holdings, Sri Lanka’s largest listed conglomerate, is presently at work in Colombo preparing the foundations for its new $650m resort, the largest investment by a domestic company in Sri Lanka.

The resort, which is due to open in 2018, will include an 900-room luxury hotel, conference venues, a shopping mall, residential apartments, an office complex and, potentially, a casino. It will be built in the land owned and occupied by the JKH subsidiaries, Ceylon Cold Stores (CCS), John Keells PLC, John Keells Properties and Waterfront Properties in Slave Island in Colombo.

Sri Lankan officials want to double the foreign tourist count to 2.5 million by 2016. Noting that more Indians were traveling to places like Singapore, Malaysia and Macau, where they were the source of considerable gross gaming revenue, officials decided that postwar a new regional tourism strategy was in order.

To attract development, Sri Lanka is offering 10-year tax breaks on income generated from visitors. The casino section of any integrated projects will be taxed, but the project will still benefit from massive tax exemptions from Customs Duty, Construction Industry Guarantee Fund Levy, Port and Airport Development Levy, V.A.T, PAYE tax for foreign employees (five years), Withholding Tax on foreign loan interest and Tax on Dividends for 11 years. Operators will also only pay six per cent tax for 12 years after the 10 year income tax holiday has ended.

Since the end of the civil war in 2009, tourist figures have been on the rise in Sri Lanka. Arrivals grew more than 20 per cent a year from 2009 to 2012, versus five per cent from 2004 to 2008. Last year arrivals hit 1.3 million in the year ending in March, with Chinese visitors rising rapidly, though India remains the largest source of visitation. John Keells is targeting the newly affluent rich in both of these countries and a casino is crucial to its plans.

Established in 1870, John Keells has diversified from its brokerage roots into supermarkets and hotels, food and beverage, investments in banks and ports. Group revenues have doubled since 2009 to $675m in 2013, while net profits similarly rose to $107m in the same period.

Investment promotions minister Lakshaman Yapa Abeywardene said the Keells resort will be allowed to operate a casino if the government issues them with a license, adding that said the project hopes to raise $300m from overseas investors. However, Sri Lankan President Rajapaksa, when questioned in June, stated that no new casino licenses would be issued, but that he, “didn’t rule out the possibility of operators securing a previously issued licence. As a result, John Keells is in talks to attract in an international gambling operator to work with the company to secure a licence from the holders of the existing five Sri Lankan gaming licences.
Ravi Wijeratne is chairman-owner of conglomerate Rank Holdings, whose interests include a port, real estate, waste-reclamation and hydro and wind energy plants. He also holds two of the five casino licenses in Sri Lanka. The other three are held by domestic counterpart, Dhammika Perera, whose personal fortune is estimated at $550m.

At present, Dhammika Perera, one of the richest men in the country has his own gambling resort in the works in the government-designated strip. (The Keells layout, which sits on land it has owned for several years, is nearly a mile away but received special permission.) Perera’s project, the Queensbury Integrated Resort & Casino, includes a 500-room hotel, a mini convention centre and its own shopping mall.

James Packer’s Crown Colombo, in partnership with Mr. Wijeratne, is priced at $400m and is said to be targeting hi-rollers and will include a casino, a 400 room hotel, restaurants and convention facilities. Crown Colombo is set to open in 2016.

It is to be hoped that all of these projects fare better than other recent high profile construction developments, such as the beleaguered Krrish Square, or the Shangri-la hotel on Galle Face, where building has ground to a halt after a dispute between the company and the government.