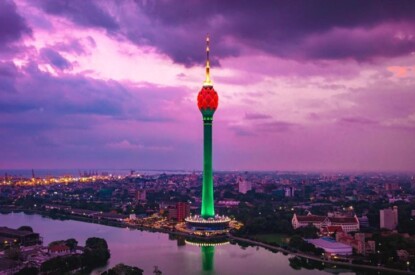 Sri Lanka is to add to its current total of five casinos with a sixth being agreed as part of an entertainment area across one floor of the Colombo Lotus Tower.

The communications tower which opened in Colombo in September is the 19th tallest building in the world and the 11th tallest in Asia. Whilst functioning as a radio and television broadcasting antenna, the structure also offers a museum, eateries, MICE facilities, an observation deck and luxury hotel rooms.

Sri Lanka’s State Minister of Tourism, Diana Gamage has revealed that Lotus Tower Management Company (LTMC) will be given US$1.4m each year following conclusion of an agreement with Singapore’s Kreate Design Pte Limited to operate a casino there. A waterpark is also planned.

Kreate Design’s Business Development Director Cyntia Chan said: “This investment agreement includes development of water sports and an entertainment zone, one of the best to be developed at world class standard at the Lotus Tower in Colombo. This will enable Colombo Lotus Tower as a hub to develop trade, investment and tourism activities between Singapore and Sri Lanka.”