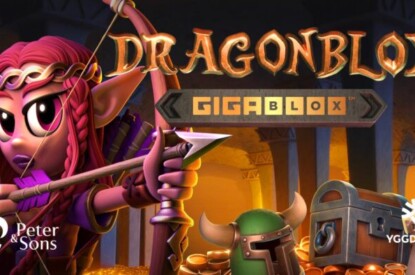 Yggdrasil, the leading worldwide publisher of online gambling content, has embarked on its latest adventure with Peter & Sons in the shining new slot Dragon Blox GigaBlox.

The reels are filled with a band of brave adventurers, gleaming symbols and Wilds, all while a fierce sleeping dragon lays surrounded by its treasure hoard behind the matrix.

Lock’N Blox spins are awarded when six or more coins land in view, triggering a respins-style round. An initial three spins are awarded, resetting when a successful turn of the reels occurs. In addition, coins can merge for giant win potential, offering a multiplier value of up to 5,000x.

Dragon Blox GigaBlox™ boasts both a Golden Bet feature, which increases the chances of the bonus mode being won for a larger stake, as well as a Buy feature, to progress directly to either of the two rounds.

Stuart McCarthy, Head of Product & Programs at Yggdrasil, said: “Our YG Masters program has entered its fourth year and we’re delighted to be collaborating with Peter & Sons for another mythical masterpiece, Dragon Blox GigaBlox™.

“Combining their unmistakable art style with exciting mechanics and bonus features is a winning formula, and we’re very happy with our latest launch.”

Yann Bautista, Business Development Manager at Peter & Sons, said: “Last year saw us come on in leaps and bounds as a studio, and we’re thrilled to hit the ground running in 2023 with Dragon Blox GigaBlox. It builds on what we’re trying to deliver to players, while utilising another of Yggdrasil’s fantastic GEMs to give a player-favourite experience.”