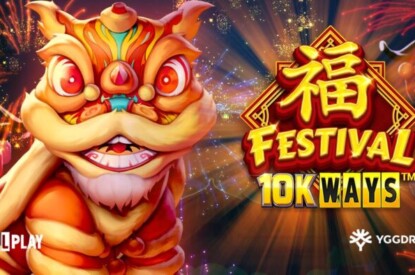 Prosperity is on the horizon as Yggdrasil and ReelPlay come together for the first time in 2023 to deliver ReelPlay’s latest release, Festival 10K WAYS.

Featuring the Chinese lucky charm symbol Fu and beautifully animated dancing dragons, the game has the potential to bring good fortune to players who want to celebrate the Lunar New Year with this 6-reel, 10,000 ways slot offering wins up to 10,000x by way of the popular Bonus Respins feature.

Bonus Respin’s are triggered whenever players land six or more scatter symbols anywhere on the game screen. This awards an initial three respins, where all scatter symbols remain sticky. With every symbol landed, remaining spins are refreshed offering the chance of the feature to spin on and on until the board is complete.

Stuart McCarthy, Head of Product & Programs at Yggdrasil, said: “This celebratory slot promises to offer good fortune to anyone wishing to immerse themselves in this beautifully designed Asian-inspired release. With up to 10,000 ways to win and thrilling chains of explosions to further post-payout potential, we fully expect ReelPlay’s latest 10K WAYS game to be a huge hit with operators and players alike.”

David Johnson, CEO at ReelPlay, said: “Festival 10K WAYS is the latest instalment in our proprietary 10K WAYS franchise. The 10K WAYS series has fast become recognisable and trusted by operators and players alike. Festival 10K WAYS is a simple yet infinitely re-playable game offering exciting features and solid mechanics, wrapped in a sensitively considered and best in class production of art, animation and sound.”