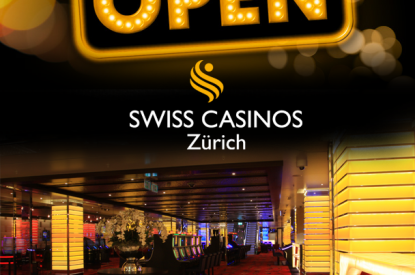 Despite the opening of two new casinos, revenue in Switzerland’s casino sector has dropped by 8.2 per cent to CHF757m during 2012 when compared to the previous year.

The Swiss Casino Federation blamed a saturated market and customer migration to the internet and to casinos in neighbouring countries as two of the most critical factors in the downturn.
The year saw new gaming floors open in Neuchâtel and other Zurich yet none of the casinos operating for the full year managed to reach their turnover for the previous year and the additional revnue from the new venues failed to make up the deficit. Last year, the Swiss casinos paid CHF372m in taxes to the State, of which 318m were for social security (AVS).

The Swiss Casino Federation stated: “Legislators need to go back to their original goals: the Swiss are supposed to play in the controlled and supervised Swiss casinos, and not be tempted by foreign, uncontrolled offers. Only then will tax income for the AVS and the cantons of Culture and Sport be generated. The year 2012 is for the Swiss casino industry characterized by the continuing decline in revenue and by the opening of two new casinos in Neuchâtel and Zurich. With 21 casinos now operating in the Swiss market, it is definitely saturated. The two new casinos lead to displacement effects. Although two new casinos were opened, the sales of the entire casino industry in 2012 decreased by 8.2 per cent compared to the previous year. In 2012, no casino could repeat the turnover of the previous year. In recent years, in France, Germany and Italy near the Swiss border, and the birth of new attractive games of chance on the Internet emerged. These are not subject to the same strict regulation as the Swiss casinos. Furthermore, the strong franc and smoking bans contribute to the decline in sales.”

Perhaps most notably, Swiss Casinos Holding, which has a shareholding in five casinos in the German-speaking cantons of the country, reported a decline of nearly CHF8m during 2012 against profits of almost CHF5m in 2011. Whilst profit was affected by the cost of development the new casino underperformed recording turnover of CHF70m rather than the CHF100m expected. Attendance was also down by 30 per cent of what had been predicted with 67,000 customers gracing the gaming floor.

The Grand Casino Luzern Group saw its Gross Gaming Revenue fall to CHF21.09m despite attracting a record high of 234,000 admissions.

The Federation added: “Looking to the future, the legislature must re-focus on its original goals, which were crucial for the approval of casinos. Currently, the federal government is developing a new gaming law. The legal framework must provide a competitive environment for the Swiss Casinos.”

Concessions for online casinos will be awarded in 2018. With this in mind, Swiss Casino is currently testing the success of free online games with 4,000 players so far registered. The current model sees players winning items to redeem in casinos, such as meals or tickets for events.