The satisfaction of working with young entrepreneurs 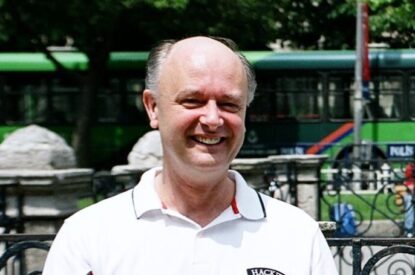 Sitting down with G3, Mark expresses his satisfaction at working with young entrepreneurs, draws comparison between data and gold, and explains why Synalogik is a company to watch out for.

ONE THING LED TO ANOTHER

My Independence Day in the gambling industry was 4 July 1984 when I bought a betting shop. One thing led to another and before I knew it, we had become a small chain of five shops before selling them to a company that eventually became part of Coral.

I then built up another small chain to the dizzy heights of six shops and then the internet came along, or at least I became aware of it.

Long story short, we were the first UK bookie that went online and survived. At the time there was just one American company that was licensing tech – it was awful and didn’t work for European-style betting.

Quite literally a betting shop owner/operator had to find a way of developing an interactive tech platform – a big challenge to say the least.

It was easy to do and by this point we had technical people on board who scaled tech development whilst building the business through marketing and organic growth. We made a small acquisition with the funding before going onto AIM in January 2001 – one of the last. coms to get away before the .com crash.

We were bottom line profitable – circa a couple of million a year – and the company went from success to success. At one point, we became the largest market capitalised company on AIM.

I left in January 2007 for a few reasons, namely the time conflict between me working full-time and managing investments using the cash I’d taken off the table by selling founder shares, my increasing interest in venture capitalism, and because the company was forced to down size from the American market when the U.S. passed the UIGEA bill (Unlawful Internet Gambling Enforcement Act of 2006) which prevented anybody operating in the States.

From 2007, I began my venture capitalism journey with a bias towards gaming that remains to this day. Of the 35 companies currently in the portfolio, seven or eight are in or around the industry. I’d include Synalogik in this category.

We didn’t know one another personally, but he knew of my gaming connections through local publicity. He contacted me on LinkedIn and said he’d like to have a chat after being approached by what was then GVC (now Entain) and wanted to know why a bookie would want an anti-fraud solution.

He came over one Saturday morning for a coffee that lasted three hours. I was blown away and it remains one of the most exciting propositions I’ve heard in a long time.

Gareth has a huge vision, an impressive background, and a founder team comprising complementary skills. I made what by my standards is a significant investment and things have continued to go well. As such, in a recent investment round I followed my money up with further investment.

The money is being used to launch new solutions, widen the Scout solution’s capabilities, and to accelerate tech development.

The products that are currently available in the market are not complete, end to end solutions, but are modular. Creating a complete end to end data driven solution decision making toolkit will help our clients, our market appeal, and will make everything far more efficient.

I think data bears similarities to being the new gold insofar as is it has a value that we’re only just beginning to understand. There are a range of potential product areas to be explored across different industry verticals.

The data is the gold dust and platforms such as that offered by Scout enable productization to take place through turning data into intelligent decision-making tools.

For people of a younger generation, it must seem very strange but many of older generation companies are still stuck with spreadsheets and armies of people, often in low-cost offshore jurisdictions.

Part of data’s future ‘trajectory’ if you will is a greater understanding of the increases in efficiency, not just in cost, but also in speed and accuracy of decision making, that is now available.

There are other product areas we also want to develop. One is an integration-lite solutions where companies can use Scout with internal data sources that are still on spreadsheets. Essentially, we can suck the data out and give clients the responses they want.

Scout can use a range of data solutions and isn’t just an open data source and, where appropriate, we can use an industry-specific data solution. For example, we have integrated some policing related data. We can’t sell that data to all and sundry, but we can use it to help police forces with their investigations.

The Scout platform offers increased efficiency for enhanced due diligence. For example, a large gaming operator may get 50,000 applications for new accounts a week. If 4-5,000 fall into a risk category, we can efficiently assist with that without requiring a few hundred people.

When it comes to AML and affordability, this is a more mature market in terms of data. From a Synalogik perspective, there are several good competitors in that area, but we offer this functionality because Scout is designed to be a complete end to end solution for clients and I like to think we do this better than anybody.

Currently, Synalogik is UK-focused. The primary industry verticals are gaming, policing, insurance, banking, defence, and asset reunification. In gaming, we have three tier one operator clients including Entain who want us to go into the U.S.

However, we don’t have boots on the ground there yet and aren’t geared up to give 24/7 U.S. time friendly support. We are aware we need to build this out, so part of the application of the recent funding round is internationalisation and the U.S. is very high on our list of future target markets. In fact, it’s number one.

The requirements for KYC, source of funds, and the fraud applications are generic across states. GeoComply are a company which began life conducting accurate geo location compliance checks where gambling was allowed on a specific premises.

They have subsequently seen other applications they can offer to their clients and have started to stray into our area. I think Synalogik and GeoComply are complementary to one another, but they are a respected competitor, and we don’t have intel on what they might do next.

They might be looking at our space and they certainly have good market traction across gaming operators in North America.

Outside of Synalogik, I’m Chairman of FSB Technology – a B2B sports betting provider. We have an American Co Founder and Chief Executive so when the U.S. opened, he understood the culture and structure of the market.

I am also Chairman of the Gambling.com Group – a super affiliate within the industry which has two American co-founders. The U.S. is our largest growing market, and the company is listed on the NASDAQ.

When it comes to my other gaming interests, I’m on the Board of Gaming Realms – a small UK-listed games developer best known for Slingo. Another data driven business in the portfolio with huge potential is Future Anthem.

They use gameplay data for the purposes of identifying clients at risk of harm or churning using clever algorithms, bringing efficiency to an area that requires improvement.

I’m also involved with beBettor, a niche business offering automated affordability checks using OSINT. The outcome of the Gambling Act review will be significant for the future direction of the company and the industry, and I expect affordability to be a cornerstone of compliance going forward.

VENTURE CAPITALIST VS THE COALFACE

I think it depends where you are in your career cycle. Being an entrepreneur for the first time with something that is really taking off is super exciting. I couldn’t wait to wake up in the morning and see how the overnight trading had been, the progress of different tech projects, planning new market entries.

It was genuinely exciting in those days as we were going into relatively virgin markets every few months and localising products, all the while learning as we went.

When I left Sportingbet, my first venture capitalist investment was into a company called Envoy Services. A few years later we sold it for £70m. What a way to convert yourself from being at the coalface! I hasten to add that I was a small shareholder but it was a great exit for all concerned.

I genuinely do get a satisfaction, not just from a financial perspective, working with young entrepreneurs. They are now so tech savvy, smart and have great vision.

Sometimes they need help to keep their feet on the ground as they are often armed with ideas but lack operational experience. There is nothing more satisfying than seeing them do well when a business exits.