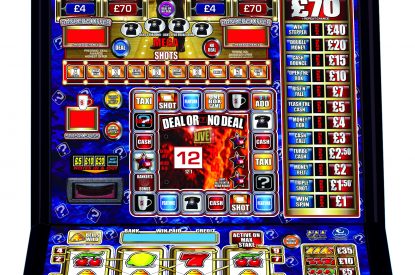 Bell-Fruit Games Managing Director John Austin has written to customers giving notice of changes to the commercial model which have been taken in order to ensure the company’s ongoing investment in the development and supply of top-performing Category C games including the award winning Deal or No Deal series which has registered a total of over 40,000 sales following the launch of the first DoND model in August 2006.

From October 2012 Bell-Fruit Games is introducing a dongle technology, similar to that used by SWP developers, whereby the game software will be enabled via a resin encapsulated (potted) piece of hardware (‘the dongle’), within which a finite expiry date is set. The dongles plug into a receptacle device inside the machine, which is connected to the main MPU. The dongle expiry will occur on the first anniversary of the launch date of the game in question, and at which point a ‘re-loaded’ dongle may be purchased.
Explaining the background to and rationale for the changes, John Austin said: “Our ultimate aim is to create a healthier market for everyone and to provide a foundation for the future development of gaming in pubs.  The market in which we operate has changed dramatically.  Whilst there has been a significant reduction in sales of Category C games, we have been faced with escalating costs of brand licensing, development and testing and continued erosion of margins which has led to the withdrawal from the market and in some cases the demise of once famous manufacturing brands.
“Despite these severe pressures we have remained focused on new games, and have succeeded in delivering a significant uplift in performance following the introduction of new Cat C regulations in October 2011. Our aim is to preserve employment prospects not just at Bell-Fruit Games but throughout the supply chain, which includes component and peripheral device suppliers, transport companies, operators and many others spread throughout the country.
“If we are not careful the manufacturing sector is in great danger of becoming the dairy farmers of the gaming industry and I believe that it would be both cowardly and dangerous not to act now. These changes mean that we will be able to continue to invest in new technology, continue to employ the smartest games developers, continue to secure the best brand licenses, continue to deploy the most effective security measures and continue to deliver our customers top earning gaming machines which contribute to their bottom line profits. It is very important to stress that this change is not just about us: the new business model, which we have considered at great length, is being introduced to create a healthier market for everyone involved in the sector.”