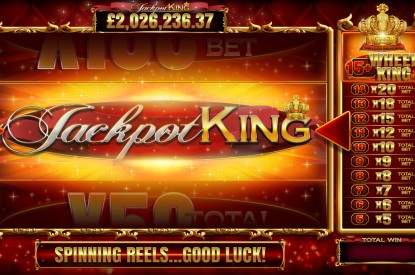 Jackpot King is the spectacular new progressive jackpot system from Blueprint Gaming that has the ability to be active across multiple slot titles and scratchcard games within a specific operator site, boosting the jackpot prize faster than any other progressive system.

The feature is designed to award fixed and progressive prizes to players across all qualifying games, allowing a broader market of customer’s access to the promotional jackpot system.

Released on Sky Vegas this Easter with Blueprint’s fantastic new titles, Top Cat and Slots O’ Gold, then closely followed by the launch of Super Spinner Bar X, the three games accompanied with the Jackpot King bonus became instantly popular with players and the operator alike, culminating in the jackpot prize hitting the £1m mark after only six weeks.

Sarah Hackett – Games Marketing Executive at Sky Vegas, said: “We knew from the start that Jackpot King would be something very special for us, but it has far surpassed our expectations. Top Cat slot quickly became one of our strongest performing game launches, while Slots O’ Gold and Super Spinner have brought another angle to the Jackpot King, giving Sky Vegas players a really diverse choice of slots to play which they cannot find anywhere else with such a huge jackpot attached to them.”

“Not only can players spin for bonus rounds, free spins and win spins but there is the added thrill of landing the ultimate bonus round. We can’t wait to play the exciting slots that will be joining the Jackpot King army in the coming weeks and months.”

2016 will see a rapid expansion of the Jackpot King progressive system which will feature on new and existing content across multiple operator sites.