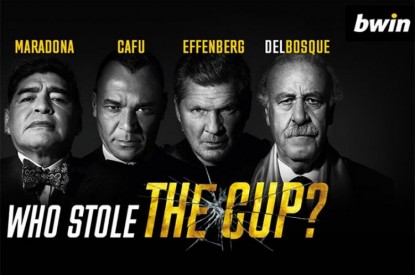 bwin has launched its latest ground breaking campaign ‘Who Stole the Cup?’ with a Hollywood-style heist, a fitting follow-up to last year’s exhilarating ‘the Race’.

This latest work is a continuation of bwin’s innovative betting advertising which invites the consumer to Live The Action predict the outcome of the ad.

By positioning its latest campaign at the most exciting moment in football for several years, bwin is ensuring it is top of mind when making that first bet.

Beautifully directed by Pedro Martin-Calero, the film stars football legends Cafu, Vicente del Bosque, Stefan Effenburg and Diego Maradona, plotting to steal the Cup. Shot in a sumptuous, cinematic style, the film is a nod to the great Hollywood crime capers of the past.

While all betting brands will be asking consumers to bet on the outcome of the matches in June only bwin will kick off in May by asking the viewers which football legend has committed the crime in a Hollywood heist extravaganza.
Each of the football legend suspects, feature across all channels of the campaign from TV, out of home and online. From the teaser phase all the way through to the reveal of who the dastardly thief was, the audience will be left guessing.
Accompanying the campaign is a series of candid behind-the-scenes interviews by Robert Pires talking to each footballing legend. The interviews contain explosive soundbites such as revelations including Maradona’s take on VAR and what would have happened if it was in-play today!

GVC’s CMO Adam Lewis commented: “Being smart, creative and bold is in GVC’s DNA and again our teams have delivered with this blockbuster World Cup campaign, it will entertain and engage our players and audiences globally, plus reinforce bwin’s position as Europe’s leading and most innovative sportsbook.”

The campaign launches this week across Europe and sees Maradona, Cafu, Stefan Effenburg and Vincente del Bosque all hatching plans to steal the Cup, with the outcome of the heist being aired at the beginning of the Tournament in June. The campaign comprises of five TV ads running simultaneously with ground-breaking social, digital and ATL marketing.
Mr. Lewis added: “To be the best you need to work with the best and the talent we involved in this campaign is legendary, we are not here for second place!”