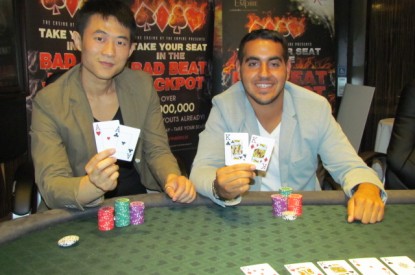 Lucky individuals celebrate their winnings after the Bad Beat Jackpot strikes twice within 48 hours at The Casino at The Empire.

Last week, the London Poker Room situated in The Casino at The Empire played host to a series of successful winning hands as players received a record-breaking payout from the legendary Bad Beat Jackpot.

The Bad Beat Jackpot continues to prove to players that they don’t have to be a poker shark to win a generous cash prize, just an awesome hand that gets a Bad Beat! Since the launch in 2010, The Empire Poker Room has cheered on players with over a £1m payout in the Bad Beat Jackpot.

Stephen Osborne, Marketing Manager said: “We are excited our Bad Beat Jackpot has given poker players a chain of payouts in two days. We will continue to maintain the best offering for our customers so they choose The Empire Poker Room as a cardroom destination of choice in London.”