UK – Crockfords investigating ‘too good to be true’£7.3m win 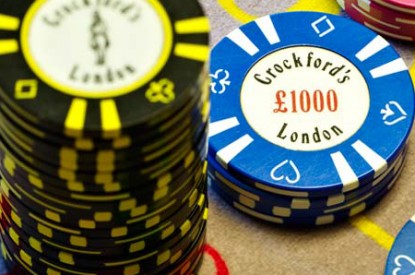 An ‘unprecedented stand-off’ has developed between an American gambler and Britain’s oldest casino after the player, described as ‘the world’s top poker player’, went on a winning streak playing Punto Banco, netting winnings of £7.3m with the casino so far refusing to pay a penny.

Crockfords, the exclusive Mayfair casino, has notified the Gambling Commission that it is withholding Phil Ivey’s winnings pending investigation. Mr. Ivey, who is famed in the poker world for once taking home a pot of £10m in a Las Vegas poker tournament, played Punto Banco for seven hours at the London casino during two nights over the August bank holiday. He was initially playing £50,000 per hand but was given permission to up his stake to £150,000. With his losses amounting to close to £500,000, his luck changed and he finished the first night £2.3m up. The second night brought his winning total to £7.3m.

Playing in a private room he was accompanied by only a croupier, an inspector, a female friend described as a ‘beautiful Oriental woman and ten CCTV cameras. Alongside the extent of the lucky streak, the casino’s concerns were raised on learning that Mr. Ivey’s companion had already been banned from another high-end casino in the capital although the reason for her exclusion has not been made public. Crockfords initially agreed to transfer the winnings after the bank holiday period but six weeks on he has so far only received the £1m stake that he bet during the seven hours.

Crockfords began an investigation, interviewing the female croupier amid fears of collusion. Top end officials from the casino’s owners Genting flew in from Malaysia to review the security tapes and check the cards and the shuffling machine used.

A source said: “No imperfections, or marks, that would have given Ivey an advantage were found. In any case, Ivey at no time touched the cards. The shoe was also thoroughly inspected; once again the investigators drew a blank.”

Lawyers representing both sides are reported to be in a tense stand-off as so far Mr. Ivey has not been accused of anything other than winning and the police have not been involved. The poker player has won a total of eight WSOP bracelets, made it to 28 final tables and won large sums of cash 51 times. Estimates pitch his poker winnings to be as high as $15m although there have been rumours circulating recently that he is struggling financially.

A spokesman for Crockfords said: “As a private club we put great store on the confidentiality of the relationship between ourselves and our client and we therefore have no comment to make.”