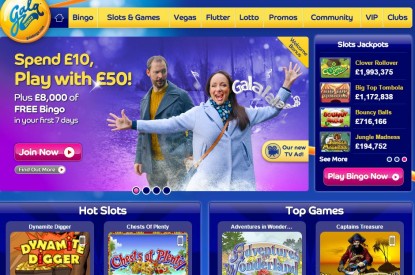 Having broken the record for the World’s Largest Bingo Balls, GalaBingo.com, the UK’s fastest growing online bingo site, will now attempt an official Guinness World Record using the largest bingo card ever at its VIP Christmas Party in London on December 6.

This is as well as having raised over £6,000 for charity partner and respected aid organisation, Royal Voluntary Service.

RVS kindly give up their time for free to deliver a happier Christmas to thousands of lonely, older people ensuring they have a traditional festive meal and companionship at what can be a very sad and reflective time of year for many.

During November 2014, Gala asked players to play bingo, with a percentage of the money earned going to RVS, and offered them the chance to win 10 pairs of tickets to the VIP Christmas Party where they could take part in the official Guinness World Record event.

In attendance will be former Strictly Come Dancing star, James Jordan, of both Celebrity Big Brother and Strictly Come Dancing fame, with other celebrity guests TOWIE stars Leah Wright, Grace Andrews, George Harrison and Charlie King. Rickie from Geordie Shore will be popping in too as will the glamorous Nicola Mclean.

All are keen to add their weight behind the official Guinness World Record attempt to play with the largest ever bingo card which will measure a whopping 5 metres by 2 metres.
Once again, the idea to team-up and raise funds for another respected charity whilst setting a fun world record reinforces the company’s market leading campaign as the industry’s ‘happiest’ online bingo brand.

Last summer saw GalaBingo.com raising money for the Male Cancer Awareness Campaign which resulted in GalaBingo.com setting an official Guinness World Record title for the largest ever set of bingo balls on the former set of Coronation Street.

“We were keen to do something to support such a great charity particularly in the run up to Christmas,” said Gala Brand Director, Alison Digges. “Bingo is all about sociability. Many of our players are older or have older people in their lives. We want to create awareness that older people can often be lonely and on their own but that needn’t be the case. By supporting the campaign we are doing our bit to ensure that loneliness is eliminated this Christmas.”