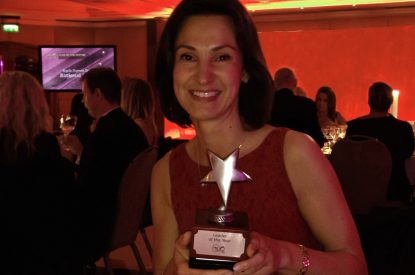 Dubravka Burda, GTech Senior Director of Global Game Development, has won the Leader of the Year Award (Land-Based) at the fifth Annual Women in Gaming Awards.

The title was awarded to Burda during the awards gala at the Jumeirah Carlton Tower Hotel in London on Friday night, June 6, 2014.

The Leader of the Year category identifies a woman working in the land-based gaming industry who has proven the ability to lead in a positive environment and has helped to inspire and guide her team to internal or external success. A panel of 10 independent industry judges selected the winner from a group of six finalists.

Since Burda began her tenure with GTech in 2011, she has grown from overseeing commercial casino games to also developing Video Lottery Terminal, Amusement With Prize and interactive content; and from managing a small team in Graz, Austria, to also leading groups in Moncton, Canada; Las Vegas, U.S.; Belgrade, Serbia; London, U.K.; and Växjö,

Sweden. Her exceptional management skills have led to her successful leadership of more than 300 employees at GTech’s game development studios around the globe.

Most recently, Dubravka’s group was behind the development of the Sphinx 3D casino game, a unique glasses-free 3D experience that has garnered critical acclaim and has won three major industry awards in late 2013 and 2014.