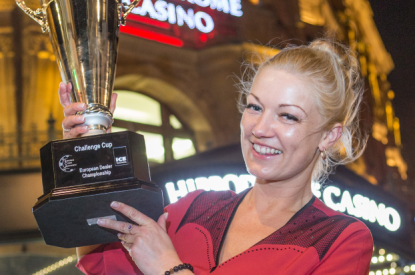 Organised by the European Casino Association (ECA) in conjunction with UK’s National Casino Forum, the 2017 championships took place from 8th – 10th May in the heart of London’s capital, a first in the competition’s 11-year history. Hosted within the historic former Hippodrome theatre which dates back to 1900, The Hippodrome Casino provided a compelling backdrop for the prestigious competition, as Europe’s dealer elite battled it out to be recognised as the best in the business.

Simon Thomas, CEO of The Hippodrome Casino, commented: “Our goal was to make this year’s event bigger and better than anything that has come before. We’ve had six months plotting and planning, and brought forward modifications to the Hippodrome, where we combined two gaming rooms into one, gaining listed building consent to remove a wall to create a really great space. We initially thought about running the event in our theatre, but realised that to offer a world-class experience, we needed the theatre for entertainment and dining, and so brought forward the changes to the building to create a large, private, gaming area on the third floor, which has worked very well.

“Our aim was to show that the UK casino industry is not just as good as everyone else, but better,” continued Mr. Thomas. “We have been delighted with the feedback and reaction we have had, knowing that the contestants and their supporters have had a great time in London. We’re proud to have hosted the EDC and to have welcomed some of the most talented dealers in the world to the Hippodrome.”

Organising the event at the Hippodrome, Floor Manager, Murat Salih, commented: “It’s been a fantastic event and a wonderful celebration of the skill and dedication of those working in our profession. It has been a pleasure to welcome the industry to the UK and host an event that has not only bonded the industry together as a whole, but brought together all the departments within the Hippodrome to deliver the ‘best ever’ European Dealer Championship!”

Commenting on the accolade of European Dealer Championship 2017, Antra Gaike said: “I am delighted to be crowned European Dealer Champion, 2017. I’ve been working in the industry for eleven years and found the job hard to begin with but with every day I spent in the casino I began to love the environment more and more. The skills required to be a dealer are difficult to master but winning today proves I am strong. I feel energised, confident and excited to see what the future brings as a result of winning this prestigious title.”

Per Jaldung, European Casino Association Chair commented: “For the ECA, the European Dealer Championship is always a fantastic forum to demonstrate the great skill and talent of the thousands of employees in the casino industry across Europe. The EDC competitors once again showed great finesse, delivering a fascinating competition.”

Not overlooking UK representation, Jamie Cummins from The Ritz Casino was named overall Maths Master whilst Stuart McCallum from Les Ambassadeurs also flew the flag for the home nation and performed with flair. Both contestants were entered into this year’s competition following winner and runner up accolades in February’s UK Dealer Championships, organised by the National Casino Forum.

Tracy Damestani, CEO of the National Casino Forum said: “Once again the European Dealer Championships has successfuly brought the casino community together for what was a highly competitive and riveting event at the spectacular Hippodrome Casino. The high calibre of talent on show this year is testament to how sought after the title is amongst dealers across Europe and the international recognition of the annual competition. Giving the dealers the opportunity to shine and show their skills at a networking event that emphasises collaboration between European countries is amazing. There’s a lot of kudos and prestige to winning this championship, but it’s also fun. This is a competitive industry, but it’s predominantly ‘fun.’ Our goal is to make the EDC the ‘World Dealer Championship’ in the near future.”

Launched in 2007, the EDC has grown into one of the premier events in the gaming industry’s calendar and this year brought together 33 participants from a record-breaking 20 European countries. In a quest to crown Europe’s top dealer, two talented entrants from some of the biggest casino operators in the industry travelled to the UK’s famous capital city to take part, including ambassadors from Austria, Belgium, Denmark, Estonia, Germany, Italy, Luxembourg, and Sweden to name but a few.