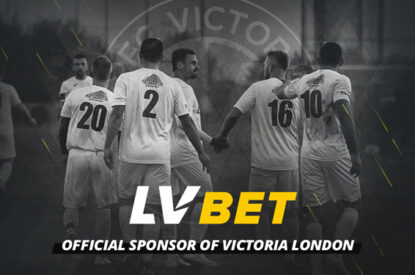 LV BET, an international brand, operating on both the Polish and English markets, has extended its sponsorship of PFC Victoria London until the end of the 2021/22 season.

In addition to the logo present on the front of the match shirts; the area of common communication has been extended, focusing on online and social media activities.

Founded in 2016, Victoria is a dynamic and innovative club, which creates facilities for higher English leagues and the in-game opportunity for talented senior level Polish players. This project can have a significant impact on the future careers of many players, as it is run by experienced football enthusiasts.

“We are very pleased with the previous cooperation with Victoria London, which resulted in increasing our sponsorship commitment in the next contract with the club. We believe in continuous dynamic development of this sports project, and that is why we have decided to sign a long-term contract this time.” – Łukasz Kieza, LV BET Head of Marketing.

President of PFC Victoria London, Tomasz Słowiak stated: “I would like to officially confirm that LV BET will be the main sponsor of our Club for the next three seasons. We are extremely pleased with the cooperation from the previous year. We also hope that our club strongly contributed to the presence of the LV BET brand on the British market.”

LV BET regularly engages with sponsorships in its operating markets. In Poland, LV BET is the main sponsor of football clubs such as Wisła Kraków and Arka Gdynia, as well as the official bookmaker of Wisła Płock, Zagłębie Sosnowiec and Stal Mielec. As of the 2019/20 season, LV BET is also an official partner of the Vanarama National League in England.